I’m delighted to be part of the Brook Cottage Books’ celebrations of ‘While I was Waiting‘ by Georgia Hill. Published by Harper Impulse in e-book and paperback, you can buy ‘While I was Waiting’ on both Amazon UK and Amazon US. I have a review of this lovely historical/time-slip romance below and you also have the opportunity to win a print copy of the book in a competition open internationally at the bottom of this blog post.

About ‘While I Was Waiting‘ 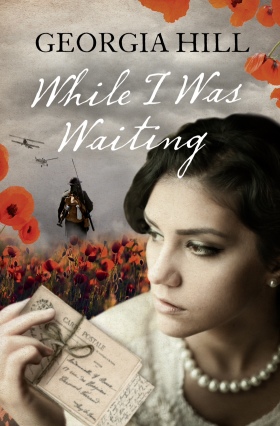 Tired of her life in London, freelance illustrator Rachel buys the beautiful but dilapidated Clematis Cottage and sets about creating the home of her dreams. But tucked away behind the water tank in the attic and left to gather dust for decades, is an old biscuit tin containing letters, postcards and a diary. So much more than old scraps of paper, these are precious memories that tell the story of Henrietta Trenchard-Lewis, a love lost in the Great War and the girl who was left behind.

My review of ‘While I was Waiting’ by Georgia Hill

I really enjoyed reading ‘While I was Waiting‘ and found that both the sections about Hetty, from her first person point of view and those about Rachel written in the third person held equal weight and attraction. Indeed, there were resonances that echoed from Hetty through Rachel’s narrative that tied the two together perfectly. Although initially I preferred the story when it was set in Rachel’s timeline, I was soon seduced by the writing into enjoying both equally.

Georgia Hill managed to convey the First World War era perfectly, especially through Hetty’s letters and diary and as my Grandfather served in WWI and my Grandmother told me about attending her first ball in 1906 I found these passages particularly touching. Hetty’s diary and letter writing was pitched just right to convey her era as well as pleasing the modern reader.

The romantic elements were beautifully handled without gratuitous detail but with convincing and engaging realism. I fell in love with Gabe a little bit myself! I found all the characterisation very effective, partly because Georgia Hill writes dialogue so naturally so that it’s like listening to real conversation. There is just a hint of the supernatural throughout too which adds another layer of interest for the reader.

I thought there was an excellent sense of place in Georgia Hill’s writing. The descriptions of Herefordshire were highly evocative so that I could picture the views from Rachel’s cottage very clearly.

The plot works so well, drawing together the resolution of both Hetty and Rachel’s stories in symmetry. Both prologue and epilogue serve to provide a symmetry and balance to the narrative.

‘While I was Waiting’ is a lovely romantic and historical read. I thoroughly enjoyed every word.

I used to live in London, where I worked in the theatre. Then I got the bizarre job of teaching road safety to the U.S. navy – in Marble Arch!

A few years ago, I did an ‘Escape to the Country’. I now live in a tiny Herefordshire village, where I scandalise the neighbours by not keeping ‘country hours’ and being unable to make a decent pot of plum jam. Home is a converted Oast house (Old agricultural building used for drying hops), which I share with my two beloved spaniels, husband (also beloved) and a ghost called Zoe.

I’ve been lucky enough to travel widely, though prefer to set my novels closer to home. Perhaps more research is needed? I’ve always wanted to base a book in the Caribbean!

I am addicted to Belgian chocolate, Jane Austen and, most of all, Strictly Come Dancing.

To have the chance of winning a print copy of the ‘While I was Waiting’ (Open Internationally), click here. Good luck!

6 thoughts on “While I Was Waiting by Georgia Hill”