I’m even more delighted to welcome Emily Hauser to Linda’s Book Bag with a guest piece on  ‘The Relevance of Ancient Narratives Today’ written specially for the book launch. You can read Emily’s piece below where you’ll get a taste for the unique quality of her writing.

About For the Most Beautiful

Beautifully imagined and exquisitely written, For the Most Beautiful chronicles the defeat of Troy as you’ve never seen it before, through characters almost entirely disregarded in Homer’s Iliad. Among legends such as Achilles, Hector and Odysseus, walked the unsung heroines, famed for their beauty, yet wholly underestimated for their influence.

This is the story of the women of Troy.

All’s fair in love and war, when Briseis, princess of Pedasus, witnesses her husband slain in cold blood, and is enslaved by his killer in the Greek camp.

Krisayis, daughter of the High Priest of Troy, dreams for more than the life set out for her by her father. Captured by her enemies, she is given this opportunity, but must sacrifice everything to protect the city that she loves.

Subject to the whims of the Gods and the wrath of men, these two extraordinary women will bring a hero to his knees.

‘Once in a while something comes along that’s so utterly right, so necessary for now,that you wonder why nobody thought of it before. Emily Hauser’s stunning debut novel For the Most Beautiful fits this space: a novel that re-imagines the oldest of territories in the freshest of ways.’

‘It’s a feast for the senses, richly described and effortlessly easy to read. It brings to life an ancient world long gone, and in so doing reminds us of the traumas and costsof war, which are sadly still so much a part of our world today.’

In this her sparkling debut novel, classicist Emily Hauser offers a fresh take on the old but living legend spun so artfully in Homer’s Iliad. By exploring and exposing their feelings, motivations and thoughts she puts us into the shoes of two key female characters that the original epic poem left tantalisingly undeveloped … Ms Hauser not only tells a ripping good story but also causes us to reflect anew on the meanings of war, especially as that affects and afflicts women.’

‘The Relevance of Ancient Narratives Today’

A Guest Piece from Emily Hauser

Why retell ancient narratives? It’s a question I think about all the time, and one which drives my research as well as my writing. For me, when I was writing For the Most Beautiful, re-telling one of the most well-known epics of ancient Greece from a different perspective allowed me to give a new slant on age-old themes and questions that still very much resonate with us today. Central to the Iliad are – among others – the question of the purpose of war and the desire for immortality; the search for the gods, and what it’s worth dying for; sex, desire, and the conflict between love and duty; the compensation of glory and the tension between power and prowess; the values expressed within the family, the close bonds of friendship, and the longing for home. All of these are, of course, very relevant today, and form an important part of my re-interpretation of the epic.

But there is also a hidden concern within the Iliad, one which is evocatively hinted at but never fully expressed – the harrowing fates of women in war, and the costs which they, as well as the warriors, have to pay. Hector’s wife, Andromache, at one point in the Iliad addresses her husband with these highly expressive words: “But come, have pity, and stay here on the wall [of Troy]; do not make your son an orphan and your wife a widow.” This opening onto the experiences of the women of Troy, for me, leaves a gap, a fertile space for re-telling and re-visioning the past in a new light. Ancient narratives are so uniquely rich (and relevant), then, not only because of the way they speak to the timeless themes of human experience – but also because they are flexible enough to allow us to remould and reflect on these values, by re-shaping them into our own form, through our own concerns.

Thinking about the purposes and costs of war is, of course, a timeless theme in literature – from Homer’s Iliad to Virgil’s Aeneid, Ernest Hemingway’s A Farewell to Arms to Sebastian Faulks’ Birdsong. And it is, it goes without saying, a central concern for our time as much as for any other. With the current conflict raging in Syria and the victims of war travelling thousands of miles to seek asylum in Europe, for example, it is hard, I think, not to draw parallels with another group of ancient legends that tells of the displacement of a nation after the ravages of war and their voyage by land and sea to a new home in Europe. The stories and legends surrounding the Trojan War tell not only of the siege and sack of the city of Troy, as we tend to think, but also of the suffering of Troy’s inhabitants after the city’s destruction: the enslavement of the women and the desperate escape of the few men – like Aeneas – who survived to escape as refugees across the sea. These tales are, then, extremely relevant to current events – and yet by being distanced from us, by being set in a different place and a different time, they provide us with a unique lens which allows us to think through the problems of war, suffering, and displacement.

It is that combination, then, of timeless themes, a unique flexibility of interpretation, and the peculiar combination of closeness and distance – which allows us to think through current issues in a more dispassionate, alternative setting – which I think ultimately makes ancient narratives so continually relevant today. And perhaps the Iliad, with its reflections on the costs of war, its transcendent vision of the human struggle, its portrayals of the lives, the passionate love-affairs and the devastating losses endured by men and women alike, and its depictions of the suffering of war victims and refugees, is the one which is able to speak to us now, most of all.

Born in Brighton and brought up in Suffolk, EMILY HAUSER studied Classics at Cambridge where she was taught by Mary Beard. She then went to Harvard as a Fulbright Scholar and now studies and teaches at Yale, where she is completing her PhD.

For the Most Beautiful – the first book in the Golden Apple trilogy – is her debut novel. 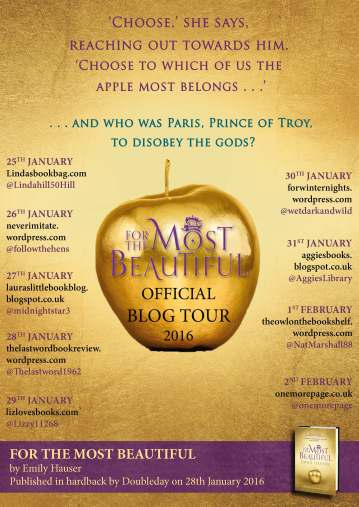 2 thoughts on “For the Most Beautiful by Emily Hauser”