One of the things I like best about blogging is that I get to ‘meet’ authors from all over the world whom I haven’t encountered before. I’m delighted to introduce a new-to-me writer, David Swykert.

David is a former 911 operator, so he is well placed to write about crime. He is also a wolf expert, having raised a couple of them himself, and has used wolves in several of his novels. 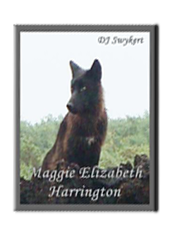 Here David tells us a little bit about how he writes and his novel ‘The Pool Boy’s Beatitude’:

I write a book like you’d watch a movie. I develop a character and then invent a conflict for him to resolve. I’m pretty straight forward as a person and a writer. I am a former 911 operator, and in 911 you don’t have the luxury of a lot of pondering, you need to get to the essence of a problem quickly. It was good training for writing a book. I also use a tip a literature teacher long ago gave me: “Never use a ten dollar word when a ten cent one will do.” I’ve tried to do that, keep my writing direct, succinct, and understandable. Too many writers try to impress readers with their massive vocabulary, but few readers, including me, want to read a book with a dictionary sitting next to them. If I have to look up definitions to understand the sentence, it closes my interest in the story and the book.

I don’t use detailed outlines to write a story. I have the character, conflict, and the ending in my head before I begin. I put the character into the conflict, and since I know how it will be resolved, the chapters always move forward to that ending. Like my character, Jack, in The Pool Boy’s Beatitude, I have always been attracted to the great mysteries of life. While Quantum Mechanics continues to search for a Theory of Everything, so have I. And I can write with authority about addiction, rehabilitation and jail. If you add the desire for a real and loving relationship into the equation you come up with the story of The Pool Boy’s Beatitude. Though it is fiction, it’s perhaps the most cathartic piece of writing I have ever produced. Not only does Jack discover anomalies to the large physical world we exist in, but also poignant truths about his own personal little universe.

In his search for the God particle Jack Joseph has lost control of the most important particle of existence, himself. Jack’s intellect may have expanded at the speed of light, but his emotional development is mired in the darkness of addiction. Without change Jack is accelerating towards a personal collision that would render his interest in the cosmic one irrelevant.

Read an extract from The Pool Boy’s Beatitude

I believe God thinks in numbers. Most of what I know best can be described with an equation, numbers predicting an outcome, relating the position, velocity, acceleration and various forces acting on a body of mass, and state this relationship as a function of time. And isn’t that what we are, what everything is: accelerated particles in space time.

And this velocity of motion is what creates gravity and holds everything together. But what creates the motion? I think about this shit all the time. Until I feel like I only know one thing: nothing.

I sat out on the grass and opened a bottle of Mad Dog 20-20. Drank it to the bottom, sucked it in like a black hole swallowing light. Alcohol goes through the brain in stages, first the cerebral cortex, the thinking brain. A friendlier, more daring person emerges, and becomes ever more creative, imaginative, as the drug continues deeper into the brain. Last to go is the limbic brain. That’s when you go numb.

I got ultimate this night, left the past, present, and flew into my future. It was brilliant, until in the morning, when I stared into the eyes of a cop. I realized I had evolved, I was homeless. Passed out on the lawn I had merged my present into my future and lost the past. I had become what I refused to change. There are no corners in a round expanding infinite universe. But I had turned one.

You can find out more about David and his books here. They are available in paperback and ebook:

One thought on “The Pool Boy’s Beatitude by David Swykert”