My grateful thanks to Georgina Moore (@PublicityBooks) for generously providing this text.

It took me a while to get used to the rhythm of this story, told in the first person by Katie, an 18 year old living in Long Island in the summer of 1972. Set in a time of decay and depression in the town, against the backdrop of the Vietnam War all the characters are struggling to find happiness and peace; whether through love, sex, drugs, relationships or alcohol. There are some very big themes explored through Katie’s eyes from abortion and homophobia to post traumatic stress disorder, but these themes are skilfully woven into the story in a way that makes them integral to our understanding of the time in which ‘If I Knew You Were Going To Be That Beautiful I Never Would Have Let You Go’ is set.

Initially, I found the frequent use of expletives jarring, but as I read on I became used to which characters spoke in which way and their language choices actually made them more real to me.

Once I attuned to the structure of introducing characters and events and weaving them into Katie’s experiences and her memories, the narrative seemed to build and build like classical music, almost hypnotising the reader into its cadences. The further I read, the more engrossed I became.

The descriptions are vivid and evocative, giving a clear mental image of the setting. At times the writing was so beautiful and insightful I had to jot down quotations to return to in the future. Judy Chicural understands and conveys the longing of youth and the frequent disappointment of experience so well that I felt a real resonance with my long lost teenage self.

I don’t know if I am able to say I ‘enjoyed’ Chicurel’s ‘If I Knew You Were Going To Be That Beautiful I Never Would Have Let You Go’, but I was certainly ensnared by the quality of the writing and emotionally moved and affected by it – so much so I wept at the end. I would certainly read it again as I’m sure I have missed many nuances on first reading. 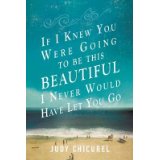