I’m delighted that it’s my turn on the blog tour for Behind the Veil by E. J. Dawson today and I can share my review. My thanks to Lilyan at Blackthorn Blog Tours for inviting me to participate.

Behind the Veil was published by Literary Wanderlust on 21st October 2021 is available for purchase here.

Can she keep the secrets of her past to rescue a girl tormented by a ghost?

In 1920s Los Angeles, Letitia Hawking reads the veil between life and death. A scrying bowl allows her to experience the final moments of the deceased. She brings closure to grief-stricken war widows and mourning families.

For Letitia, it is a penance. She knows no such peace.

For Alasdair Driscoll, it may be the only way to save his niece, Finola, from her growing night terrors. But when Letitia sees a shadowy figure attached to the household, it rouses old fears of her unspeakable past in England.

When a man comes to her about his missing daughter, the third girl to go missing in as many months, Letitia can’t help him when she can’t see who’s taken them.

As a darkness haunts Letitia’s vision, she may not be given a choice in helping the determined Mr Driscoll, or stop herself falling in love with him. But to do so risks a part of herself she locked away, and to release it may cost Letitia her sanity and her heart.

My Review of Behind the Veil

Behind the Veil couldn’t be further from my usual choice of genre, but I absolutely loved this story. It’s packed with such intrigue, excitement, fear and mystery that I absolutely gulped it down.

The plot in Behind the Veil is fast paced and dramatic. Short chapters compel the reader onwards and the italicised sections are particularly exciting and gripping. Towards the end of Behind the Veil my pulse was racing and my heart thumping because E. J. Dawson knows exactly how to create tension through the use of the senses in her writing. Her descriptions are evocative and convincing.

Despite the other-worldliness of the plotting, every aspect of Behind the Veil feels authentic and realistic so that I may now be a convert to the genre! I found the dialogue perfect for the 1920’s setting, because there is a formality that sounds really genuine. I think this book would make a fantastic film too.

Letitia Hawking is a wonderful creation. Both vulnerable and strong, she represents a feminism that I found completely engaging. I loved her rituals, her practices and the darkness of her past that permeates this story and is the driving force for her actions. Her integrity in the face of scepticism and expectation made me care about her completely. Whilst she may indulge in actions that are beyond the scope of readers, she feels so realistic that I was entranced by her. Her developing relationship with Alasdair Driscoll adds another element of entertainment to for the reader too.

Behind the Veil does deal with some difficult themes such as abuse, but E.J. Dawson never presents them gratuitously. They are threaded into the narrative in a manner that illustrates the dangers and horrors of both this and the supernatural life without direct exposition so that they are all the more powerful. I thought the style of writing here was superb. I loved the title too because it represents the veil between this life and the spiritual one, between outward appearance and reality and between convention and deviation so that the story has hugely satisfying layers to uncover. Letitia’s physical veil that she likes to wear embodies the metaphor wonderfully.

Having begun Behind the Veil thinking it might be vaguely entertaining, I finished it in the knowledge that I had been treated to a brilliant narrative that made me think, scared me and engaged me completely. I thought Behind the Veil was absolutely excellent. 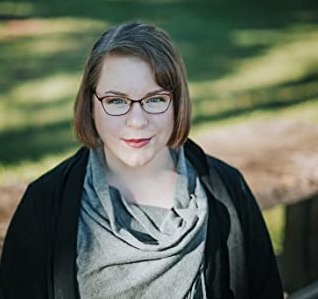 Beginning a writing journey with an epic 21 book series, Ejay started her author career in 2014 and has taken on the ups and downs of self-publishing with her fantasy series The Last Prophecy since 2016. At the start of 2019, she put the series on the backburner to write Behind the Veil in 25 days, and signed a publishing contract for the gothic noir novel to independent publisher Literary Wanderlust.

She resumed self-publishing a scifi series, Queen of Spades released across 2020 and 2021, as well as signing another contract with Literary Wanderlust for NA fantasy, Echo of the Evercry. Believing in more than one path to a career in publishing, Ejay pursues self-publishing alongside querying traditional publishers with multiple manuscripts.