Today, I’m delighted to share my review of The House by the Loch by Kirsty Wark which was the book discussed at my reading group this month.

The House by the Loch was published by Two Roads on 13th June 2019 and is available for purchase through the links here.

The House by the Loch 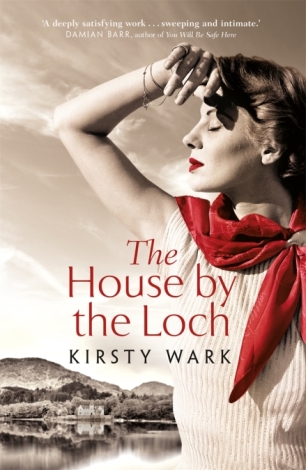 Walter MacMillan is bewitched by the clever, glamorous Jean Thompson and can’t believe his luck when she agrees to marry him. Neither can she, for Walter represents a steady and loving man who can perhaps quiet the demons inside her. Yet their home on remote Loch Doon soon becomes a prison for Jean and neither a young family, nor Walter’s care, can seem to save her.

Many years later, Walter is with his adult children and adored grandchildren on the shores of Loch Doon where the family has been holidaying for two generations. But the shadows of the past stretch over them and will turn all their lives upside down on one fateful weekend.

The House by the Loch is the story of a family in all its loving complexity, and the way it can, and must, remake itself endlessly in order to make peace with the past.

My Review of The House by the Loch

I’m going to be totally honest and say that to begin with I wasn’t sure if I would enjoy The House by the Loch. Initially it felt a little too descriptive. However, once I attuned myself to Kirsty Wark’s writing and realised that setting is absolutely essential to the narrative I realised my original concern was entirely misplaced and I ended up absolutely loving this evocatively written story. It’s difficult to say too much about plot for fear of spoiling the story for others, but I found The House by the Loch captured me completely.

The loch, the countryside and the physical buildings are beautifully presented so that I could envisage them in my imagination. Kirsty Wark’s writing had the ability to transport me right into the setting and I found her dialogue felt so real it was as if I were listening in to conversations rather than reading about them. The House by the Loch is a visual and auditory feast to the extent I did actually forget I was reading a book.

The characters are vivid and real, depicted through carefully crafted nuances so that I cared about them all. The portrayals of Walter, Carson and Jean in particular held me spellbound. Jean’s brittle, glittering, alcohol fuelled life felt every bit as tragic to me as any Shakespearean character and I frequently felt that Walter was a man more sinned against than sinning. It was Carson who gained my compassion the most. Her relationship with Walter, her guilt, her ambition and her development through the novel felt so true to life.

Indeed, it is relationships that make The House by the Loch such a compelling read for me. Kirsty Wark explores what family love and loyalty is, and how it can affect us, with such sensitivity that she managed to reduce me to tears several times. Her uncovering of truths, her exploration of addiction and mental health, of family, grief and guilt all blend into a hugely affecting read that builds through beautiful writing, understanding of humanity and moving plotting.

The House by the Loch is intense with feeling. It’s moving, emotional and ultimately hopeful. I began unsure if I’d like it and ended thinking it was a wonderful read.

Kirsty Wark is a journalist, broadcaster and writer who has presented a wide range of BBC programmes for more than twenty five years, from the ground-breaking Late Show to the weekly arts and cultural review show The Review Show and the nightly current affairs show Newsnight. Kirsty has won several major awards for her work, including BAFTA Awards for Outstanding Contribution to Broadcasting, Journalist of the Year and Best Television Presenter.

Her debut novel, The Legacy of Elizabeth Pringle, was published in March 2014 by Two Roads and was shortlisted for the Saltire First Book of the Year Award, as well as nominated for the International DUBLIN Literary Award.

4 thoughts on “The House by the Loch by Kirsty Wark”