Now, I don’t watch much television and recently suffered terrible FOMO when Bridgerton was on as I don’t have Netflix and couldn’t see it. When Sophie Morgan told me about Daisy Chapman’s debut book and how it might help fill that gap I felt, I simply had to invite Daisy on to Linda’s Book Bag to stay in with me and tell me more.

Staying in with Daisy Chapman

Welcome to Linda’s Book Bag Daisy. Thank you for agreeing to stay in with me.

Thank you for having me Linda. 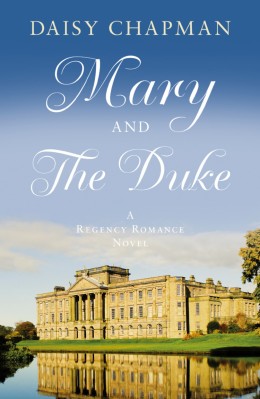 I have brought along my debut novel Mary and the Duke which is a Regency romance that I’m excited to share with the world and it is available from the 28th of November.

How exciting to have your debut published. Congratulations Daisy.

What can we expect from an evening in with Mary and the Duke?

Well to start off with the heroine of my story Mary Barker isn’t like any other young woman from the regency period as she has no interest in balls or finding a husband. She’s a very knowledgeable young woman as her father didn’t stop her from studying. But when it comes to men and the world, she’s completely clueless. Mary has a way of telling it how she sees it and she tends to jump in head first and not think things through which sometimes lands her in trouble. But when she spends more time with the Duke she ends up learning more about herself and the world around her and that there is more to the man than meets the eye.

You have made her sound very modern and appealing Daisy. I have a feeling I’d like to meet Mary!

I have brought along a copy of Clementi Sonatinas and Sonatas for piano which my character Mary Barker would have certainly had a copy of as she is a truly talented pianist and it would have been her most prized possession and Mary would have most likely have spent most of her days practising the pieces of music at her piano.

Ah, that’s a skill I’d have loved to have.

Thanks so much for staying in with me to chat about Mary and the Duke Daisy. You put on the music and I’ll give readers a few more details.

Mary and the Duke

It’s the height of the regency period, and the season is in full swing…

Miss Mary Barker is one of two daughters in a fine family of seven that remains unmarried; Mrs Barker expects both to marry by the end of the season, but Mary has other ideas. She would much rather remain independent like a man and has no need of a husband.

‘Captain’ Dylan Cravendish, handsome and charming, hears his uncle’s final wishes in Bristol: for him to become Duke Cravendish of Cattleton.

When Duke Cravendish quite literally falls over Miss Mary Barker when attending his first ball in Cattleton, she’s the only one not bowled over by his charms and wastes no time on telling the Duke her opinion of him.

But as the two continue to cross paths in Cattleton and Bath, steadily getting to know each other, can Mary find a way to see past the pirate to the man underneath? Or will she allow his past to ruin their possible future?

Published on 28th November 2021, Mary and the Duke is available for purchase in all the usual places like Waterstones, and Blackwells and including directly from the publisher here.

Daisy Chapman grew up in the countryside in Lincolnshire but she currently works in the hospitality industry in a hotel in Northampton. During her free time Daisy enjoys baking and watching romantic movies.

9 thoughts on “Staying in with Daisy Chapman”