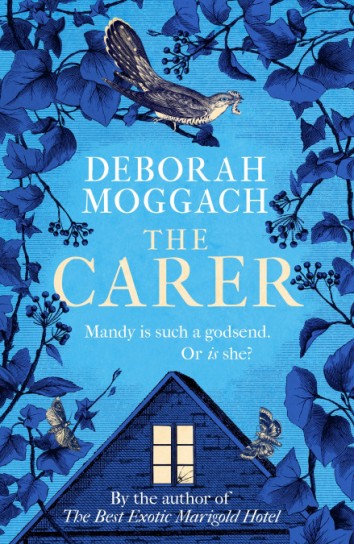 It was lovely book publicist Georgina Moore who sent me a surprise copy of The Carer by Deborah Moggach many months ago and I have been desperate to read it ever since. Today I’m thrilled to be sharing my review and would like to extend my grateful thanks to Georgina for the opportunity to read The Carer.

Published by Headline imprint Tinder Press, The Carer is available for purchase through the links here. 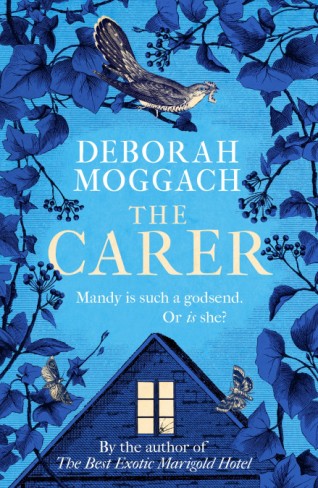 From the bestselling author of The Best Exotic Marigold Hotel and Tulip Fever, a deliciously funny, poignant and wry novel, full of surprising twists and turns:

James is getting on a bit and needs full-time help. So Phoebe and Robert, his middle-aged offspring, employ Mandy, who seems willing to take him off their hands. But as James regales his family with tales of Mandy’s virtues, their shopping trips and the shared pleasure of their journeys to garden centres, Phoebe and Robert sense something is amiss.

Then something extraordinary happens which throws everything into new relief, changing all the stories of their childhood – and the father – that they thought they knew so well.

My Review of The Carer

Phoebe and Robert might get more than they bargain for when they hire Mandy to look after their father, James.

My goodness I loved The Carer. It’s years since I read a Deborah Moggach book and The Carer illustrates just what I’ve been missing. Her style is so fluid, perceptive, drily homorous and empathetic it’s as if she has looked into the soul of humanity and recreated it on the page. The conversational style of The Carer makes it feel as if the author is recounting the events face to face, making for an intimate reading experience.

Deborah Moggach’s characters are simply wonderful. Her depiction of the parent child relationship between Phoebe, Robert and James illustrates with piercing accuracy the dynamics of everyday life. Both struggling with their own identities, Phoebe and Robert hardly pause to think about their parents, and James in particular, making them both realistic individuals. In The Carer, the reader is shown with unnerving accuracy how petty, commonplace life shapes a person just as much as life changing events do. I thought this aspect of the novel was stunning and Mandy’s character in particular was so well drawn. I’m not entirely sure I really warmed to any of the people I found between the pages of The Carer and I wouldn’t have any of them as friends, but Deborah Moggach still made me care about them all to the extent that I even shed a tear. This is masterful writing.

Whilst The Carer is very much a character driven story, the plot is a cracker too. I simply didn’t expect the many of the events and, although I can’t say more for fear of spoiling the read, I so enjoyed the way the narrative unfolded.

Thematically, The Carer raises far more than just the exploration of how we care for our parents as they age. The true nature of love, family, guilt, rivalry, success and failure all weave in and out of the story so that, despite being a relatively short read, this book has marvellous depth and texture.

I thoroughly enjoyed reading The Carer – so much so that I devoured it in one sitting. The Carer is a book that helps us understand what it is to be a parent or a child, whatever our age, and Deborah Moggach teachers us to understand ourselves just as much as her characters. I thought it was wonderful. 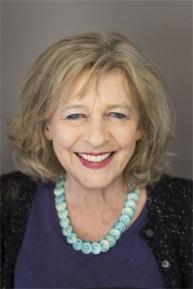 Deborah Moggach is the author of nineteen successful novels including the bestselling Tulip Fever. In 2012, her novel These Foolish Things was adapted for the screen under the title The Best Exotic Marigold Hotel and starred Judi Dench, Dev Patel, Bill Nighy and Maggie Smith.

An award-winning screenwriter, she won a Writers’ Guild Award for her adaptation of Anne Fine’s Goggle-Eyes and her screenplay for the 2005 adaptation of Pride and Prejudice was nominated for a BAFTA.

Her television screenwriting credits include the acclaimed adaptations of her own novels Close Relations and Final Demand, as well as Nancy Mitford’s Love in a Cold Climate and The Diary of Anne Frank.

Deborah has been Chairman of the Society of Authors and worked for PEN’s Executive Committee. A fellow of the Royal Society of Literature, she was appointed an OBE in the 2018 New Year’s Honours List for services to literature and drama.

11 thoughts on “The Carer by Deborah Moggach”