As my own grandfather was originally listed as missing, believed dead, following his involvement on day six of the Battle of the Somme, I have always been fascinated by the individual stories of the men and boys (my grandfather was 19 at the time) who fought, so when a surprise copy of Caroline Scott’s The Photographer of the Lost arrived from Sara-Jade Virtue at Simon and Schuster, I was delighted. I would like to thank S-J for sending it to me in return for an honest review. Then when blog tour organiser Anne Cater got in touch to say she would be running a Random Things tour for The Photographer of the Lost I knew I had to be involved.

(In case you were wondering, Granddad eventually turned up blinded in one eye and with shrapnel in his body for the rest of his life. He died when he was 87. Unfit for front line duties because of his injuries, after two weeks of recovery, he was placed in the Labour Corps for the rest of the war.)

Published by Simon and Schuster on 31st October, The Photographer of the Lost is available for pre-order through the links here.

The Photographer of the Lost 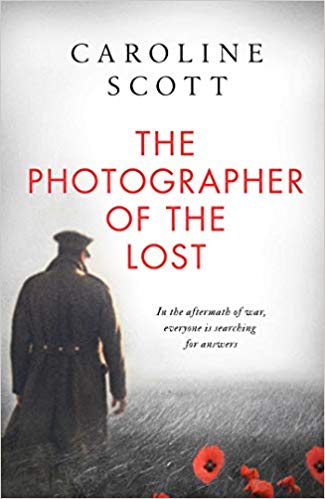 Until she knows her husband’s fate, she cannot decide her own…
An epic novel of forbidden love, loss, and the shattered hearts left behind in the wake of World War I

‘Beautiful, unflinching, elegiac: The Photographer of the Lost is going to be on an awful lot of Best Books of the Year lists, mine included . . . it’s unforgettable’ Iona Grey, bestselling author of The Glittering Hour.

1921. Families are desperately trying to piece together the fragments of their broken lives. While many survivors of the Great War have been reunited with their loved ones, Edie’s husband Francis has not come home. He is considered ‘missing in action’, but when Edie receives a mysterious photograph taken by Francis in the post, hope flares. And so she begins to search.

Harry, Francis’s brother, fought alongside him. He too longs for Francis to be alive, so they can forgive each other for the last things they ever said. Both brothers shared a love of photography and it is that which brings Harry back to the Western Front. Hired by grieving families to photograph gravesites, as he travels through battle-scarred France gathering news for British wives and mothers, Harry also searches for evidence of his brother.

And as Harry and Edie’s paths converge, they get closer to a startling truth.

An incredibly moving account of an often-forgotten moment in history, The Photographer of the Lost tells the story of the thousands of soldiers who were lost amid the chaos and ruins, and the even greater number of men and women desperate to find them again.

My Review of The Photographer of the Lost

The end of WW1 is just the beginning of the search for missing loved ones for so many families.

I’ve been sitting here some time wondering how to do justice to Caroline Scott’s wonderful, heartbreaking and unforgettable The Photographer of the Lost. I think I might find it impossible to convey what a beautifully written, moving and profound book it is. I had thought I might have had enough of reading about WW1, but The Photographer of the Lost transcends just about everything else I’ve read about the era because of its exquisite balance of focus on the war and the aftermath for those left behind.

Caroline Scott’s prose is stunning. At times poetic, at times stark, there isn’t an unnecessary syllable in this perfectly crafted narrative. That isn’t to say it feels unnaturally polished or contrived, but rather that Caroline Scott has given her very soul to her writing to ensure she conveys exactly what she needs so that the reader is completely mesmerised. I found reading The Photographer of the Lost such an intense experience I had to give myself short breaks to process the emotion, whilst simultaneously being unable to tear myself away from Harry and Edie’s story. The Photographer of the Lost was in my head the whole time, even when I was sleeping. There is little direct speech, but what is there thrums with emotion even when it is deceptively simple in appearance.

The story itself in The Photographer of the Lost is brilliantly wrought. The passages set during the war placed me so vividly there that I felt I was experiencing the same aspects as the men. The black humour and camaraderie between the soldiers ameliorates perfectly their situations and locations and their petty resentments and jibes illustrate exactly what life was like. The representations of France and Belgium both during the war and in 1921 are so evocative that there is a cimematic quality to Caroline Scott’s writing. Descriptions are fantastic, so that I could picture every setting perfectly. Indeed, if The Photographer of the Lost doesn’t become a feature film, there is no justice.

But for all that, it is the characterisation that is so fabulous and makes The Photographer of the Lost so emotive. Although he is ‘lost’ throughout the majority of the book, Francis has such presence that he represents every single one of those who were missing at the end of the war. The way in which fate and small items (which I can’t reveal because they would spoil the plot) alter his life and history, alongside the huge arena of war, is utterly heartbreaking. There’s a brittle quality to many of the characters, Edie especially, that creates an almost unbearable tension in the writing. My heart physically ached for these people. They were as real to me as anyone I know and Harry’s awful task of photographing graves and buildings for those back in England desperate for some kind of closure brought a new perspective to reading about WW1 that felt as terrible as any factual account ever has. I was touched, educated and saddened in equal measure.

The Photographer of the Lost is a beautiful, haunting and unforgettable story. At the end of the novel I wept for them all; for Francis, Edie, Harry, for the lost and the found, and all those whose lives were so affected by events during that terrible time. Caroline Scott has written a wonderful tribute in her absorbing, moving narrative. The Photographer of the Lost is a remarkable book and I adored every word.

Caroline completed a PhD in History at the University of Durham. She developed a particular interest in the impact of the First World War on the landscape of Belgium and France, and in the experience of women during the conflict – fascinations that she was able to pursue while she spent several years working as a researcher for a Belgian company. Caroline is originally from Lancashire, but now lives in southwest France.

14 thoughts on “The Photographer of the Lost by Caroline Scott”