I’ve tried so hard to be strong and not accept books this year as I am still inundated, but occasionally I’m offered a book for review that I know is my kind of read and I can’t resist. Once such book was The Light in the Dark: A winter journal by Horatio Clare and I would like to thank Alison Menzies at Elliott & Thompson for sending me a copy in return for an honest review.

The Light in the Dark: A Winter Journal is available for purchase here.

The Light in the Dark: A Winter Journal 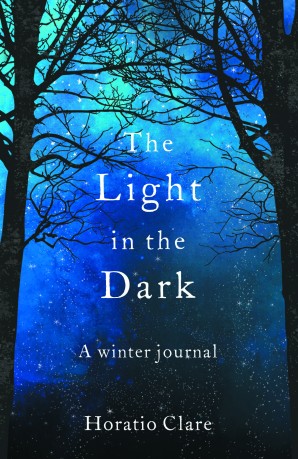 As November stubs out the glow of autumn and the days tighten into shorter hours, winter’s occupation begins. Preparing for winter has its own rhythms, as old as our exchanges with the land. Of all the seasons, it draws us together. But winter can be tough.

It is a time of introspection, of looking inwards. Seasonal sadness; winter blues; depression – such feelings are widespread in the darker months. But by looking outwards, by being in and observing nature, we can appreciate its rhythms. Mountains make sense in any weather. The voices of a wood always speak consolation. A brush of frost; subtle colours; days as bright as a magpie’s cackle. We can learn to see and celebrate winter in all its shadows and lights.

In this moving and lyrical evocation of a British winter and the feelings it inspires, Horatio Clare raises a torch against the darkness, illuminating the blackest corners of the season, and delving into memory and myth to explore the powerful hold that winter has on us. By learning to see, we can find the magic, the light that burns bright at the heart of winter: spring will come again.

My Review of The Light in the Dark: A Winter Journal

A personal view of the winter months.

My goodness. I think I may have just discovered a new to me favourite author. The Light in the Dark is a glorious read.

Horatio Clare’s attempt to find the positives in his winter induced depression, through keeping a winter journal, is a touching, honest and beautiful account that celebrates life even in the depths of despair. I think anyone who suffers seasonal winter blues through to full blown depression can dip into The Light in the Dark and find a passage that will lift their spirits and help them feel they are not alone in their suffering. Even though the author is honest in the editing he has done to remove the worst of his experiences from The Light in the Dark, I found this a compellingly truthful book that really touched me.

Horatio Clare’s writing is utterly, utterly, wonderful – ethereal at times. I think he might be the most poetic prose writer I’ve ever read. His descriptions of nature, especially birds and the weather, filled me with absolute joy. It truly lifted my heart to read his perfectly crafted language, especially when he created new compound descriptors or used vivid imaginative metaphors that painted images in my mind. This author has a skill beyond compare and I feel privileged to have read him.

Travel writer, memoirist and children’s author Horatio Clare was born in London in 1973. He read English at the University of York and later worked as a BBC radio producer on cultural programmes Front Row, Nightwaves and The Verb. As a freelance journalist he has contributed numerous travel pieces to newspapers and magazines, as well as to From Our Own Correspondent on BBC Radio Four.

Running for the Hills (2006), a memoir of his childhood on a sheep farm in West Wales, was nominated for the Guardian First Book Award, and received a Somerset Maugham award. Its autobiographical sequel, Truant: Notes from the Slippery Slope (2007), detailed his descent into and recovery from drug addictions and mental problems. He was shortlisted for the Sunday Times Young Writer of the Year Award in 2007.

Having lived in Palermo, he edited the anthology Sicily: Through Writers’ Eyes (2006), collecting works by D.H. Lawrence, Giuseppe de Lampedusa, Norman Lewis and others, with his own lyrical observations on the island’s rich culture and history.

His travel book A Single Swallow (2009) follows the migration of swallows from South Africa to South Wales, recording encounters with people along the way. In 2010 he won the Foreign Press Association Award for his feature Rock of Ages – Ethiopian Highlands. His novella The Prince’s Pen (2011) is a contemporary re-working of the tale of ‘Lludd and Lefellys’ from the Mabinogion.

He was awarded the 2015 Stanford Dolman Book of the Year for Down to the Sea in Ships (2014), an account of two voyages on container ships. His first book for children, Aubrey and the Terrible Yoot, published in 2015, was shortlisted for the Branford Boase Award. While continuing to travel the world, he divides his time between London, Wales and West Yorkshire.

16 thoughts on “The Light in the Dark: A Winter Journal by Horatio Clare”