My grateful thanks to Charlotte Cooper at Midas PR for a copy of The Liar in the Library by Simon Brett in return for an honest review.

The Liar in the Library will be published in paperback on 6th June 2019 by Black Thorn Books and is available for purchase here.

The Liar in the Library

Fethering has everything a sleepy coastal town should: a snug English pub, lots of cosy cottages, a little local library – and the occasional murder . . .

Bestselling author Burton St Clair, complete with soaring ego and wandering hands, has come to town to give a talk. But after his corpse is found slumped in his car, he won’t be leaving.

Jude is the prime suspect; she was, after all, the last person to see Burton St Clair alive.

If she is to prove her innocence, she will have to dust off her detective skills and recruit her prim and proper neighbour (and partner-in-sleuthing) Carole to find the real culprit.

My Review of The Liar in the Library

Burton St Clair’s visit to Fethering Library may not turn out quite as he planned!

I read The Liar in the Library at a time that couldn’t have been more apt, finishing it just before heading off to my local library to interview an author for the Deepings Literary Festival so it had particular resonance (though thankfully we had no murders) and I found Simon Brett’s writing hugely entertaining.

There’s a cracking plot in this slim book that romps along. I have to admit that I suspected everyone of having committed the murder and was frequently wrong-footed so that The Liar in the Library is a perfect example of a traditional who-dunnit with frequent dead ends and red herrings. At times there is a stereotypical and almost self-conscious aspect to characters, attitudes and events but which feels entirely deliberate and all the more appealing for it, adding to my pleasure in reading. These conventions mean that not only does The Liar in the Library refer to the Golden Age of crime fiction, it adds to the body of work perfectly. This is such an ingenious conceit that made me smile as I read. There’s also a wonderfully pithy representation of the publishing world; the jealousies and practices that authors suffer and employ, that frequently made me laugh aloud.

I loved the prickly relationship between Jude and Carole. Their self imposed rules about accepted behaviour reminded me of so many people I know that I felt Simon Brett had captured the social mores of middle class England perfectly in Fethering. Add in some Polish immigrants and a gossipy pub and all life is laid bare in the precise and carefully crafted prose.

I don’t usually make comparisons between writers but the sharp observational prose reminded me of Conrad’s The Secret Agent, with the crime conventions of Agatha Christie and the wit of P.G. Wodehouse so that The Liar in the Library felt diverting and entertaining. The Liar in the Library is acerbic, tongue-in-cheek and beguiling. I thoroughly enjoyed reading it. 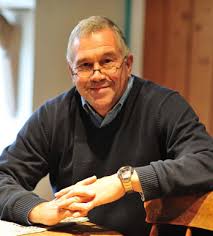 Simon Brett worked as a producer in radio and television before taking up writing full-time. He was awarded an OBE in the 2016 New Year’s Honours ‘for services to literature’ and also was elected a Fellow of the Royal Society of Literature. In 2014 he won the CWA’s prestigious Diamond Dagger for an outstanding body of work.

You can find out more by visiting Simon’s website.

4 thoughts on “The Liar in the Library by Simon Brett”