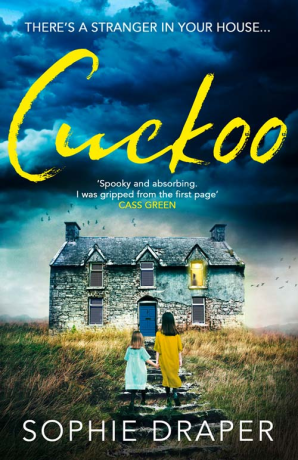 I love a twisty psychological thriller so I’d like to extend my enormous thanks to Sabah Khan at Avon Books for inviting me to be part of the launch celebrations for Cuckoo by Sophie Draper and for sending me a copy of the book in return for an honest review.

Published by Harper Collins imprint Avon on 29th November 2018, Cuckoo is available for purchase through the links here.

There’s a stranger in your house…

When her stepmother dies unexpectedly, Caro returns to her childhood home in Derbyshire. She hadn’t seen Elizabeth in years, but the remote farmhouse offers refuge from a bad relationship, and a chance to start again.

But going through Elizabeth’s belongings unearths memories Caro would rather stay buried. In particular, the story her stepmother would tell her, about two little girls and the terrible thing they do.

As heavy snow traps Caro in the village, where her neighbours stare and whisper, Caro is forced to question why Elizabeth hated her so much, and what she was hiding. But does she really want to uncover the truth?

A haunting and twisty story about the lies we tell those closest to us, perfect for fans of Ruth Ware and Cass Green.

My Review of Cuckoo

After her step-mother’s funeral artist Caro returns to live in the family home in Derbyshire.

Oh yes indeedy! I really enjoyed reading Cuckoo. I did have willingly to suspend my disbelief a couple of times but I think that says more about me as a reader than it does about the narrative. I’m such a coward that had some of the events happened to me that happen to Caro I’d have run screaming for the Derbyshire hills and never returned. I really was quite unnerved on occasion.

I loved the claustrophobia of the setting. Derbyshire became as much a part of the story as the other characters and I could picture the scenes so vividly because Sophie Draper describes them brilliantly accurately. There’s such a clever build up in the writing from the literal restriction of the snow, through Caro’s reluctance to explore the house, to the more psychological elements of trapped memories and behaviours. Obviously I don’t want to spoil the story so I can’t say too much but I will say that this is very intelligently constructed.

In Cuckoo, Sophie Draper also makes wonderful subtle references that build up the tension throughout because they have the ability to trigger associations in the reader. I thought of Macbeth, The Snow Queen and the film Don’t Look Now for example, all of which created the atmosphere for me. All the fairy tale references, the traditions of cautionary fables and morality lurk in a menacing way beneath the surface of Cuckoo, so that reality and imagination become blurred not just for Caro. It was as if Sophie Draper’s writing and Caro’s paintings ensnared my own reader emotions and fears without my permission, making for a very affecting read. I think Cuckoo would make a truly fabulous film as many of the element are extremely visual and cinematic.

The reduced number of characters also adds to the creepy claustrophobic atmosphere. I had no idea who to trust and even after reading the ending I still have my doubts. Caro is complex; vulnerable and strong in equal measure. I don’t think I’d want her as a friend and at times I didn’t much like her but I was spellbound by her.

I thought the plot was so good. Of course I had it all worked out and knew exactly what the denouement would be. Of course I was mostly wrong! I did guess a couple of elements that gave an added satisfaction to the reading because it made me feel part of the story, but at times I was also incredibly wrong-footed so that I experienced shocks and surprises too.

The themes in Cuckoo are fascinating. Family, guilt, memory, manipulation, community, superstition, relationships – I could go on – are all there. I really want to reread Cuckoo straightaway to look more carefully at the clues and the way Sophie Draper manipulated the reader. Cuckoo is a book that rewards a close and careful read.

Cuckoo is everything I want in this genre. It’s twisty, gripping and entertaining so that I didn’t want it to end. Cracking reading that I thoroughly recommend.

Sophie Draper was born in the Midlands but raised in Scotland. After gaining an MA in Mediaeval History, she followed a career in finance, travelling the world as a management consultant and International Finance Director. She took a career break to have a family, returning to work as a non-executive director for a building society.

After her youngest child was born, Sophie rediscovered her love of stories, taking up life as a writer and traditional oral storyteller. In 2013, she was nominated for the British Awards for Storytelling Excellence in the category of Outstanding Female Storyteller. She now performs across the UK, telling stories to both adults and children, at festivals, schools, museums, historic houses and community groups.

Her debut novel, Cuckoo, was published by Avon (HarperCollins) on 29th November 2018. In 2017, Cuckoo (then titled The Pear Drum) won the Bath Novel Award, as well as the prestigious Friday Night Live competition at the York Festival of Writing. A second book is to be published by Avon later in 2019.

Sophie lives with her family in rural Derbyshire, in a house filled with music, several cats, too many books and three growing boys.

2 thoughts on “Cuckoo by Sophie Draper”