Although I’ve always heard wonderful things about Jennie Ensor’s writing and her first novel Blind Side, I’ve never actually read her before so I’m delighted to put that right today and share my review of The  Girl in His Eyes. My grateful thanks to Jennie for sending me an early copy in return for an honest review. As I was unable to take part in the launch blog tour because I was (due to be) away I’ve been desperate to share my review for weeks.

Published by Bloodhound on 18th September 2018 The Girl in His Eyes is available for purchase here.

The Girl In His Eyes

Her father abused her when she was a child. For years she was too afraid to speak out. But now she suspects he’s found another victim…

Laura, a young woman struggling to deal with what her father did to her a decade ago, is horrified to realise that the girl he takes swimming might be his next victim. Emma is twelve – the age Laura was when her father took away her innocence.

Intimidated by her father’s rages, Laura has never told anyone the truth about her childhood. Now she must decide whether she has the courage to expose him and face the consequences.

Can Laura overcome her fear and save Emma before the worst happens?

My Review of The Girl In His Eyes

Laura hides a secret about her father Paul that could just affect others too.

When I first saw the subject matter of The Girl In His Eyes I wasn’t sure if this book would be for me, but Jennie Elsor writes so effectively that I found myself drawn into the book immediately and I found it hard to tear myself away. What she does so well is to present difficult concepts with searing clarity so that the reader is compelled to read on and find out what happens.

The plot is fast paced and exciting, weaving in and out of the three perspectives of Laura, Paul and Suzanne, but this isn’t the most gripping aspect of The Girl In His Eyes. Rather, it is Jennie Ensor’s creation of character and examination of human psychology that so ensnares the reader. Whilst I frequently wanted to scream at Laura and Suzanne for their responses to Paul at times, I understood exactly why they behaved the way they did so that it made me question much about what happens in cases like the storyline in real life and to doubt my own very firmly held beliefs about how I might behave in similar circumstances.

Paul is a magnificent creation. He’s vile and depraved but simultaneously ordinary and charming so that it is easy to see how men like him survive in life and convince themselves and others that their lives are acceptable. I thought the way Jennie Ensor explored how the consequences of background and childhood so influence us as adults was brilliantly handled. It is no wonder to me that Laura takes on the job she does for example.

The themes in The Girl In His Eyes are uncomfortable and unsettling. Some of the writing is quite explicit, but never gratuitously so. I think some readers may find these elements hard to deal with if their experiences have been similar, because the quality of the writing is so good, but I also think The Girl In His Eyes is a book all should read. It’s riveting reading, albeit uncomfortable at times, but it tackles the subject of abuse so brilliantly because it shows the ease with which a man can justify his actions and how those closest to him can accept them too. The concept of deception at all levels underpins this book and fascinates the reader.

The Girl In His Eyes disturbs, shocks and disconcerts. It is also convincing, captivating and all too credible. It’s a book I won’t forget in a hurry. 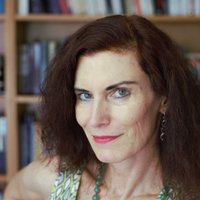 A Londoner with Irish heritage, Jennie Ensor began her writing career as a journalist, obtaining a Masters in Journalism (winning two awards) and covering topics from forced marriages to accidents in the mining industry. She is keenly interested in social issues, which often creep into her novels, stories and poems.

Jennie Ensor’s debut novel Blind Side was published by Unbound Digital in 2016; a second novel The Girl In His Eyes, a psychological thriller with echoes of Nabokov’s Lolita, will be published by Bloodhound Books in September 2018.

Her poetry has appeared in many literary publications, most recently Ink Sweat and Tears. In January 2018 her short story The Gift was placed in the Top 40 of the Words and Women UK national prose competition. In her spare time, she sings in a chamber choir and dreams of becoming a hermit or perhaps kayaking an impossibly long river.

7 thoughts on “The Girl In His Eyes by Jennie Ensor”