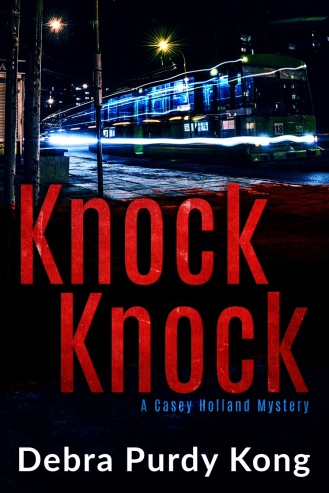 What with one thing and two others it’s been a bit manic here on the blog of late so it gives me great pleasure to put my feet up and stay in with Debra Purdy Kong today whilst she tells me all about one of her books.

Staying in with Debra Purdy Kong

Welcome to Linda’s Book Bag, Debra. Thank you for agreeing to stay in with me.

It’s a pleasure, and thank you for the invitation.

I’ve brought my latest mystery novel, Knock Knock which was published in November 2017 and is #5 in the Casey Holland series. It’s been a long and interesting journey to write about the same protagonist all these years and I’m pleased, not to mention a little relieved, to have finally finished this book!

(I’m always fascinated by authors who have a series Debra. It strikes me that they must get to know their characters intimately!)

I’ve also chosen this book because it represents a return to self-publishing. The first four books were published a year apart from 2011-2014 by a traditional publisher here in Canada. It was extremely difficult to submit a book a year, what with a day job and an aging mother who requires more care. By the time I and my publisher parted company and I got all rights back to my work, I was well into the third draft of Knock Knock. Self-publishing allows me to work at my pace, which is really important right now, given my hectic schedule.

(This is so interesting. I know of several authors who have decided to take complete control over their work after having been traditionally published. I know what you mean too about having older parents. My elderly mother takes up quite a bit of time …)

What can we expect from an evening with your mystery Knock Knock?

Hopefully, you can expect an entertaining whodunit with a little bit of grit. My protagonist Casey Holland is a 33-year-old transit security officer employed by a private bus company in Vancouver British Columbia. Undercover transit officers have been riding Vancouver’s real-life TransLink buses for years, by the way, but most people are unaware of their presence.

Through her work, Casey encounters plenty of unsavory characters. But in Knock Knock, things are different. She and the team are working with the police to help protect senior bus riders who are being stalked and then targeted by a group home invasion thieves. Meanwhile, Casey’s trying to prepare for her upcoming wedding, be a parent to her fourteen-year-old ward, and deal with a growing number of violent encounters, not the least of which happens to her.

(This sounds very exciting Debra. I know many Linda’s Book Bag readers will enjoy it.)

Many of my ideas come from true events and this one is no exception. Vancouver and many North American cities have endured home invasions. Given that my 83-year-old Mom lives on her own and that a senior was recently attacked in her area, it’s something that I think about a lot.

(And what a sad world it is when we have this kind of issues to think about.) 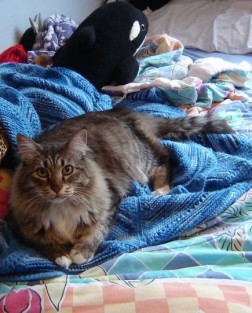 I’ve brought a photo of my cat Mimo in his younger years.

(As a mad cat woman I’m delighted to meet Mimo!)

He’s almost 19 years old now and doesn’t keep himself nearly as well-groomed as he was in this photo. He’s also pretty much deaf. He’s a daily reminder that at this point in my life, I need to care for older things…pets, people, and even our aging home. Knock Knock reminds me that I also need to watch out for my neighbours and other seniors. As my Mother says, and I’m sure Mimo would if he could, aging isn’t easy. As my protagonist, Casey, knows all too well, the elderly need all the help they can get.

(Oh yes indeed! It has been an intense couple of years for me too looking after parents Debra. My father had a massive stroke almost exactly two years ago and it took 17 weeks to kill him so we have had a tricky time looking after my Mum too.)

Thanks so much for staying in with me to chat about Knock Knock Debra. I’ve really enjoyed it.

The latest attack in a string of violent Vancouver home invasions kills senior Elsie Englehart. Security officer Casey Holland is devastated. She is supposed to be watching over elderly bus riders in an affluent, high-risk area, but she’s let Elsie down.

Determined to keep others safe, Casey escorts an elderly man home, but an armed intruder attacks them both. Hospitalized and angry, Casey struggles to regain control of her life, despite interference from family and colleagues—and the postponement of her long-awaited wedding.

Yet another home invasion compels Casey to take action, but at what cost to her health and her relationships? In Knock Knock, Debra Purdy Kong’s fifth installment of the Casey Holland series, the risks have never been higher and the consequences more deadly.

Knock Knock is available for purchase on Amazon and iTunes. 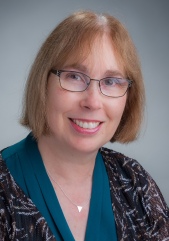 Criminology studies, along with volunteer work in prisons and employment in the security field, inspired Debra to write the Casey Holland transit security novels The Opposite of Dark, Deadly Accusations, Beneath the Bleak New Moon, The Deep End, and Knock Knock. She has also two Evan Dunstan mystery novellas, Dead Man Floating and A Toxic Craft, published more than fifty short stories in a variety of genres as well as personal essays, and articles for publications such as Chicken Soup for the Bride’s Soul, B.C. Parent Magazine, and The Vancouver Sun.

20 thoughts on “Staying in with Debra Purdy Kong”