I’m absolutely delighted to be starting off the launch celebrations for Half A World Away by Sue Haasler. Normally when authors stay in with me on Linda’s Book Bag I don’t really know which book they might be sharing in advance but today I had a pretty good idea!

Staying in with Sue Haasler

Welcome to Linda’s Book Bag, Sue. Thank you for agreeing to stay in with me.

I’ve brought my new novel Half A World Away, which has just been published by The Dome Press.

What can we expect from an evening in with Half A World Away?

We’ll be taken to East Berlin in the last years of the Cold War, to a world that’s now completely disappeared, a through the looking glass country where a lot is familiar, but a lot is alien and strange. It’s not a whole world away from us – just half!

(I love a book where I can ‘travel’ Sue. That concept of it being ‘half’ a world away is really intriguing.)

We’ll meet handsome, kind Alex, who would have been happy to live a normal life working in his father’s bakery if he hadn’t fallen in love, first with music and then with a girl from a so-called “enemy country.” We’ll meet Nicky, who is loving and optimistic, but still feels guilty about a decision she had to make in the past. And we’ll meet Detlef, who would be a misfit in any country but in the GDR he thinks he’s found a way to fit in – until his world turns upside down when he sets eyes on Alex. It’s a love story, but with a lot of twists and turns and very specific to a time and a place.

(Half A World Away sounds wonderful. I’m so glad I have a copy on my TBR pile.)

As Alex is a baker, I’ve brought a selection of typical East German bread and cakes. Various bread rolls – Milchbrötchen, which is like brioche; Semmeln, which are bread rolls where two are stuck together like the number 8; and a hollow cake called Spritzkuchen, all lovely eaten warm, with butter and cheese. 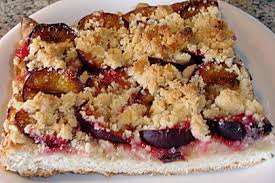 Then we’ve got Pflaumkuchen, a delicious tray bake made with plums and a sweet, crumbly topping. We might have some cream with that. And we’ll wash it all down with the famous sparkling wine, Rotkäppchen. It’s still hugely popular today, but in the GDR times it was reserved for special occasions. You might have garnished it with a pineapple chunk, if you could manage to get tinned pineapple.

(Oh my goodness Sue. I can’t drink ordinary wine but I love a sparkling one and those other foods look delicious. You can come again!)

While we’re eating and drinking we could listen to some Charlie Parker – saxophone player Alex’s all-time hero. Or perhaps some David Bowie, because he has a part to play in the book, as he played a concert in West Berlin in 1987, right next to the Wall. Because we’re on the East side, we can hear him, even if we can’t actually see him.

I love those music choices. I really must visit Berlin and in the meantime I’ll do so vicariously through reading Half A World Away. Congratulations again Sue on today’s publication. Thank you so much, Sue, for staying in with me to introduce Half a World Away, happy publication day and good luck!

Half A World Away

Alex is a talented saxophonist, flirting with ‘Western’ jazz as well as girls. When he meets Nicky – a beautiful English girl visiting East Berlin as an au pair – she makes him feel that his dreams could become reality.

Detlev’s love for his country has always been enough for him, until Alex makes him feel things he never thought possible. But what use is his passion when its object doesn’t even know he exists?

As Alex meets a new group of musicians, he moves closer to influences considered subversive by a state that has eyes and ears everywhere – and Detlev’s unrequited feelings threaten to endanger them all.

Published today, 12th April 2018, by Dome Press, Half A World Away is available for purchase here.

Sue Haasler was born and brought up in County Durham and studied English Literature and Linguistics at Liverpool University.

​After graduating she moved to London and worked for three years as a residential social worker. Since then, she has lived as an administrator for a disability charity, which recruits volunteer carers for disabled adults.

​Many of the volunteers are from abroad and this is how she met her husband, who is from the former East Berlin.

Sue is the author of four romantic fiction titles, True Colours, Time After Time, Two’s Company (all Orion paperbacks) and Better Than the Real Thing. Two’s Company was optioned for film by Warner Bros.

​She has been commissioned by the BBC to write an authorized tie-in to Holby City.

​Sue is married with an adult daughter and lives in London.