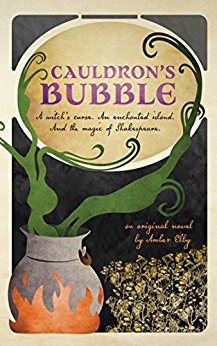 I really enjoy young adult fiction and am always on the look out for something new so I’m thrilled Amber Elby has agreed to stay in with me to tell me about one of her YA books.

Staying in with Amber Elby

Welcome to Linda’s Book Bag, Amber. Thank you for agreeing to stay in with me.

Thank you for hosting me, Linda.  You have a lovely space for a bookworm, and I am honored to share it with you this evening.

(That’s very kind of you – though you might have to move a few books to find space to be seated!)

I brought my debut YA fantasy novel, Cauldron’s Bubble.  This is a fast-paced narrative that appeals equally to those who have carefully studied Shakespeare, such as professional educators, as well as students who have yet to be introduced to his classic tales.  The novel also seeks to empower some of Shakespeare’s weaker female characters and expand on his secondary characters as it opens new doors into his plays and introduces twenty-first century readers to his stories.

(What an utterly brilliant premise for a novel Amber. I love the concept of  Cauldron’s Bubble.)

What can we expect from an evening in with Cauldron’s Bubble?

You should expect to stay up rather late because Cauldron’s Bubble has enough suspense to keep you up past the witching hour!

Imagine that Shakespeare’s characters could interact off-stage and that their adventures could span beyond the bounds of the Bard’s fiction: Hamlet deviously escapes from the pirates who capture him on the way to England; Macbeth’s witches perform their magic on unsuspecting victims; and Sycorax awakes from the shadowy backstory of The Tempest, bent on revenge against those who stole her island.  These stories and more come to life in Cauldron’s Bubble as readers follow two new protagonists, an orphan named Alda and a cabin boy called Dreng, as they each search for something lost.

The novel alternates between their limited third-person perspectives as Alda discovers a magical bubble that transports her to Macbeth’s witches on the moor.  Dreng, meanwhile, helps Prince Hamlet escape from pirates en route to England.  The two protagonists come together on Prospero’s enchanted island, where Alda is on a quest to free Ariel, and Dreng is smitten with the mysterious Miranda.  Ultimately, Alda must find powers she gained in a forgotten realm called Netherfeld to defeat a summoner, and Dreng must awake to the realities around him before he is consumed by powerful magic.

(This sounds so exciting – and what a brilliant way to draw in readers to Shakespeare.)

After you finish Cauldron’s Bubble, you may even want to brush up on Shakespeare’s plays, so it is helpful if you have some copies on hand if you want to explore further.

(If you look above you at the book case Amber, you’ll see all of Shakespeare’s plays and sonnets – I studied and taught them for years.) 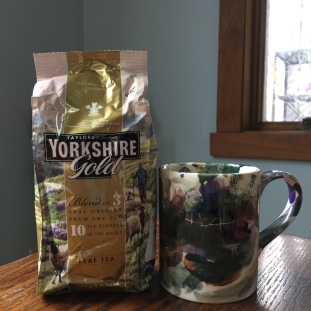 I brought some of my favorite tea, Yorkshire Gold, to share with you this evening.  I even brought a mug that was painted by my two daughters, but it is probably best that we not all share that.

(Brilliant mug and anyone who is a tea drinker is always a welcome guest here Amber.)

My two daughters are also with me.  They love to travel and explore, so I brought of a photograph of them below deck on the Golden Hind in London last March and a more recent photograph of them at the aquarium in Epcot at Walt Disney World.  Their curiosity helped motivate me to write Cauldron’s Bubble, and I derived Alda’s name from a combination of their two names; their feistiness is evident in Alda’s personality, too.

(How wonderful. Your girls must be so proud of you and Cauldron’s Bubble.)

My husband sends his regrets as he is home doing housework and making dinner for all of us, but I suspect he is reading a science fiction novel as well, perhaps with one of our cats on his lap.  He promised that he would clean and do chores as long as I spend my free time writing, so I plan to write a great deal and to continue to do so for the rest of my life (don’t tell him that I do it to avoid vacuuming).  My husband and I met in fifth grade and started dating when we were seventeen, and he has always been encouraging, so I am lucky to have him as my biggest fan.

(Your husband sounds a great deal like my own who does all the cooking and shopping alongside a very great deal of the housework!)

Finally, I brought an old copy of Macbeth tucked away in my purse.  I taught it many years ago at Austin’s Liberal Arts and Science Academy, which is where I first got the inspiration for Cauldron’s Bubble.  I realized then that my students had no prior exposure to Shakespeare’s plays and that they needed a bridge text to introduce them to his characters and conflicts.  Many of my students read the Percy Jackson series during the previous summer and used it to better understand The Odyssey, so I decided that a YA fantasy novel would be a wonderful introduction into the worlds of Shakespeare.  That’s how Cauldron’s Bubble came into creation!

(My old copy of Macbeth is falling apart so we can compare editions Amber.)

Thanks so much for staying in with me to tell me all about Cauldron’s Bubble Amber. I’ve really enjoyed being transported back to my teaching days.

A magical bubble transports Alda through time and place to a realm of witches and curses, pirates and princes, and the lost worlds of Shakespeare. She, along with a cabin boy called Dreng, must navigate the conflicts and characters of Macbeth, Hamlet, and The Tempest. But will they escape with their lives? Or will they become lost and forgotten?

Cauldron’s Bubble is available for purchase from your local Amazon site. 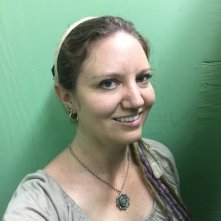 Amber Elby was born in Grand Ledge, Michigan but spent much of her childhood in the United Kingdom.  She began writing when she was three years old and created miniature books by asking her family how to spell every, single, word.

Several years later, she saw her first Shakespearean comedy, Much Ado About Nothing, in London.

Many years later, she studied Creative Writing at Michigan State University’s Honors College before earning her Master of Fine Arts degree in Screenwriting at the University of Texas at Austin.

She currently resides in Texas with her husband and two daughters and spends her time teaching, traveling, and getting lost in imaginary worlds.

7 thoughts on “Staying in with Amber Elby”