One of the most wonderful things about being a blogger is the chance to meet authors both face to face and vicariously whom I’d never otherwise encounter. Today I’m delighted to be staying in with Andrea Jutson who is another new to me writer.

Staying in with Andrea Jutson

Welcome to Linda’s Book Bag, Andrea. Thank you for agreeing to stay in with me.

Today I’ve brought along my first novel in the James Paxton series, Senseless. I’ve written two books featuring Paxton so far, and it’s always best to start at the beginning. And I’m very excited to say that it’s just been released in the UK, having been published originally in New Zealand, where the books are set. And book two, The Darkness Looking Back, is due out in February… 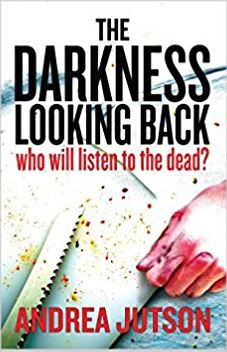 What can we expect from an evening in with Senseless?

If you’re going to spend the evening with James Paxton, be warned that you may not want to switch the lights off. While the books are very much police procedural thrillers – I was inspired by Mark Billingham and Stuart MacBride – there’s also a tinge of the supernatural. Paxton is quite possibly the world’s most reluctant medium, having left his native UK to escape the whispers of his neighbours, but the other side hasn’t finished with him…

After stumbling across a dead body, and hearing the dead man speak, Paxton is dragged into a murder investigation. And the bodies keep on mounting. You can expect a good number of twists and turns, leavened with dark humour, plus of course the beautiful Auckland landscape. Although a crime thriller loaded with corpses possibly isn’t the best tourism advertisement, I hope some of you will be inspired to visit. There’s a lot more to us than mountains and hobbits. It’s really important to me to give a sense of the city, even if we don’t have nearly this many murders on a regular basis! I must say, I’ve learnt so much more about Aberdeen from Stuart MacBride, Iceland from Yrsa Sigurdardottir or Cape Town from Deon Meyer, than I ever would have done otherwise. Reading crime novels is a great education – almost as good as travel itself, and certainly a lot cheaper.

(Love that idea of travelling through fiction Andrea.)

It amused me to make Paxton’s home town Wellington, Shropshire (where I attended an extremely interesting service at the local Spiritualist Church), as a link between the UK and New Zealand. I picked Shropshire as a location thanks to a teenage fascination with the works of Ellis Peters, and Wellington (now part of Telford) leapt off the map. Some time later, working in London for a year, I ended up getting a job at the Wellington Arch, but that’s a different Wellington again…

(Woo – lots of coincidences then…)

Today I’ve brought a bottle of Oyster Inn sauvignon blanc to share with you, Linda. I don’t drink a lot of wine, as it goes straight to my head, but this is some of the most deliciously fruity stuff from Marlborough in New Zealand, which is blended and sold at a restaurant on Waiheke Island in Auckland. So it’s come, in a roundabout way, direct from Auckland to you. Pour a glass while I pull out this book from my bag. Ah, thanks. I’ll just put it over here so I don’t spill it.

So here’s what started this whole business – a book called Ghost Hunting with Derek Acorah, from the old programme Most Haunted. When I was in my teens, I used to watch a bit of it, and it inspired me to try writing a detective series with supernatural elements. It’s a lot trickier than it looks, as of course you can’t have your main character know everything immediately just by chatting to a spirit. Luckily the other side is famously hazy.

A lot of people ask me the question, do I believe in psychics? The truth is, probably not. Until I was in my early twenties I would have answered most definitely yes, but as time has gone on I’ve become considerably more sceptical, especially after reading Christopher Brookmyre’s wonderful Attack of the Unsinkable Rubber Ducks and more about the history of the spiritualist movement.

Poor old Sir Arthur Conan Doyle made a complete dick of himself, I’m sorry to say, no matter how much I enjoy Sherlock Holmes. So – at the moment I would say no, just as I don’t believe in God or angelic beings, but I always treat believers with respect, because a) it’s good manners, b) several good friends and family members are passionate believers and c) there should always be room for doubt (which is why blind faith has never appealed). Ghosts are such fascinating things, and bigots or extremists who claim to be certain of everything frighten me a lot more.

In the meantime, I console myself that fantasy authors don’t have to believe wholeheartedly in elves, werewolves or the fae to write about them, no matter how much they might like to. I’ve tried to ensure that what Paxton senses reflects spiritualist orthodoxy. Research is the key – read up on your subject, whether it’s goblin lore or mediums’ autobiographies, speak to knowledgeable people, and make it as authentic as possible. I’m so pleased that Oscar de Muriel is writing supernaturally-themed crime novels set in Edinburgh now, which gives more authority to the genre as well as being bloody good reads!

I’d like to raise a glass to all the authors I’ve mentioned, and all the other fantastic authors who’ve inspired me to become a better writer over the years. Thanks guys. And thanks Linda, for having me.

Thank you Andrea. I’ve really enjoyed hearing about Senseless. Thanks so much for staying in with me to talk about it and to discuss all the things that make me nervous! 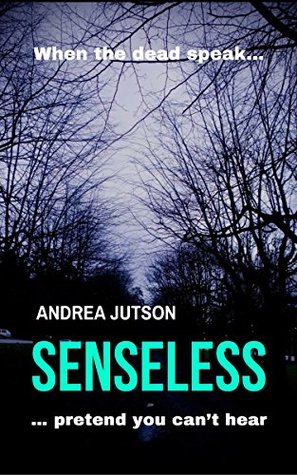 A small park in a nice Auckland suburb is the least likely spot to stumble across a body. The discovery of a man recently bludgeoned to death shatters the illusion of midwinter calm.
But unfortunately for James Paxton, death is nothing out of the ordinary. Suspicion falls all too easily on the Englishman who’s hiding a secret. Not only did Paxton find the dead man – he spoke to him, too. Gifts he wished he never had are called into play when Mark Bradley begs him to track down his killer, for the sake of his daughter. Paxton’s carefully constructed new world threatens to crumble as he is sucked into the hunt for a predator, while the police snap close at his heels. And the corpses keep on mounting, one by one …

A darkly gripping mystery with an other-worldly twist.

Published by Williams and Whiting and Senseless is the first in Andrea Jutson’s James Paxton Mysteries and is available for purchase here.

Andrea Jutson is a writer from Auckland, New Zealand. She has written two crime novels featuring reticent medium James Paxton, Senseless and The Darkness Looking Back, and is at work on a third. In her career, Andrea has been a bookseller, journalist, collections librarian, book buyer and journalist again, and once spent almost a year selling tickets at a heritage site in London. She now works at a public relations agency, and lives in South Auckland.

6 thoughts on “Staying in with Andrea Jutson”