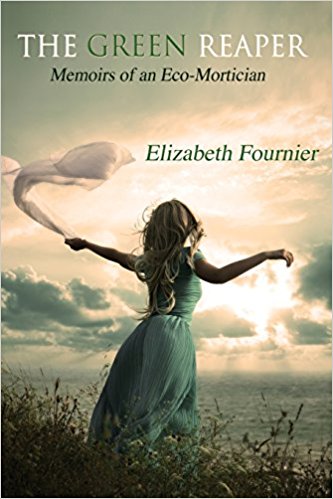 Exactly a year ago today it was my lovely Dad’s funeral. I miss him incredibly and I thought I would mark the day with a guest post from Elizabeth Fournier who works in the world of funerals and has a memoir all about how she came to be in this role; The Green Reaper: Memoirs of an Eco-Mortician. With Mum currently in hospital with a broken hip it seems even more poignant to feature this book today as we never know what might be round the corner.

The Green Reaper: Memoirs of an Eco-Mortician was published by WiDo on 1st August 2017 and is available for purchase here.

The Green Reaper: Memoirs of an Eco-Mortician 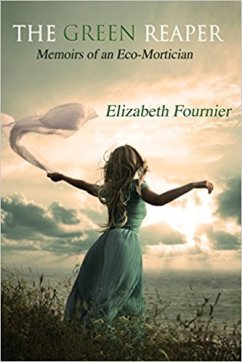 When Elizabeth Fournier was eight, her mother and grandparents died. She spent a lot of time in funeral homes as a kid since her family were frequently found in caskets. Fournier family members didn’t have the best longevity record.

As a young girl, Elizabeth found cemeteries a place of peace and tranquility. As a teen, she’d attend funerals of people she didn’t know. Not surprisingly, she eventually headed into the local funeral home and asked for a job, any job. She landed the position of live-in night keeper, where she resided in a trailer in the far reaches of a large, hilly cemetery. She slept with a shotgun near her bed, experiencing the scariest summer of her life.

In her memoir, Elizabeth Fournier writes about her calling to the funeral industry, and how her early struggles helped shape her life ministry: taking care of the dead and preparing more meaningful burials.

As a one-woman funeral service in the rural town of Boring, Oregon, Mortician Elizabeth Fournier supports old-school burial practices that are kinder to humans and the Earth. She has been called “The Green Reaper” for her passionate advocacy of green burial.

As an undertaker, she is always ready to lend a hand, or a shovel.

Green burial may seem like an avant-garde choice, but in the not-too-distant past, we would keep our recently deceased loved one at home, buy a casket from the local general store, prepare a resting space in the backyard or churchyard, and then conduct the burial ourselves with some simple reflection and quiet dignity.

In the most familiar definition, a green burial means a person is buried in a container that can decompose, along with their human remains, and return to the earth’s soil. Ideally, all aspects of a green burial are as organic as possible.

By taking time now to write out your suggestions for how you envision your final wishes, your surviving loved ones hopefully can feel less stress when the time arrives and a will gives them permission to validate your life rather than mourn your death and helps take some of the edge off their own sense of loss and heavy grief. To make sure your final wishes are considered legal, I always suggest bringing the paper you wrote them down on to your local bank where a Notary Public can stamp and record the document.

There are many things to reflect upon while making writing down your plans: What capacity can your community serve to be helpful? Can you put together a team from your personal and social connections to oversee and take on the practical steps needed for a successful home funeral and green burial? Without hiring a professional, can you assemble a tribe of loving souls who will have the understanding that even a clear medical advance decision might change as the individual nears their passing?

Part of the protocol should be to appoint a photographer. Most people have cell phone with built in cameras, so designate main picture snapping to someone who regularly snaps photos and would feel quite at ease documenting the journey.

A gentle note of caution: sometimes your vision cannot be carried out. Sometimes it is too extravagant, time or possibly weather is not on your side, members of your assembled team physically or emotionally can no longer follow through, loved ones can’t agree which then creates a stumbling block, or maybe the well-choreographed plan falls short for some unseen reason somewhere along the way. Give yourself, the others involved, and the decedent a grand gift by heading into this process with full flexibility.

People aren’t interested so much in how they will be remembered, but rather how they can continue to give back. Even in death.

(What an interesting post Elizabeth. I think Dad would have approved!)

Elizabeth is a lifetime undertaker who owns and operates Cornerstone Funeral Services in Boring, Oregon. She serves on the Advisory Board for the Green Burial Council, the environmental certification organization setting the standard for green burial in North America. Elizabeth is a founding member of Green Burial Portland, a natural burial consortium, and she starred in the documentary Death Goes Green, an intimate portrait of the pioneers of the green burial movement, which placed in the International Hot Docs Festival in Toronto, Canada.

She is also an actress in commercials, film work, voice overs, and has appeared in three episodes of the NBC series, Grimm. She was sought after to sell caskets to the prop department for death-related scenes, and was consulted with as a mortuary advisor. Elizabeth is currently the voice of the autopsy exhibit in the forensic wing at the United States National Museum of Medicine.

11 thoughts on “Green Burial: A Guest Post by Elizabeth Fournier, Author of The Green Reaper: Memoirs of an Eco-Mortician”