I cannot thank Diana Morgan at Ruth Killick Publicity enough for inviting me to be part of the launch celebrations for Sweet William by Iain Maitland and providing a copy of the book in return for an honest review.

Published by Contrabrand, the crime imprint of Sarabrand, Sweet William is available for purchase here. 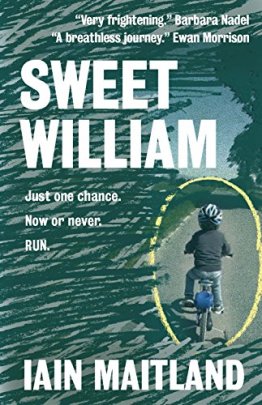 Life and death played out over 48 hours.

A father desperate to be with his young son escapes from a secure psychiatric hospital, knowing he has just one chance for the two of them to start a new life together. His goal is to snatch the three-year-old – a diabetic who needs insulin to stay alive – and run away to France … but first he must find the boy, evade his foster family and stay well clear of the police, already in pursuit.

A real page-turner cut through with dark humour, Sweet William zeroes in on a potent mix: mental illness, a foster family under pressure, and an aggrieved father separated from his precious child. The result is an incisive and deeply affecting literary thriller.

My Review of Sweet William

Don’t you just love it when a book is so good you have to put your whole life on hold until you’ve devoured every word? That’s exactly what Sweet William is like.

From the very first word of Sweet William I was hooked. The writing is fantastic. Partly it’s the superbly created voice of the narrator so that I was inside his dubious head with him. Partly it’s the overall quality of the writing with the rhetorical questions and the stunning sentence structure that has maximum impact on the reader. And partly it’s the breathtaking pace of the plot over 48 hours that left me reeling. I genuinely felt tense the whole time I was reading but, although I had to pause to let my pulse slow back down, I couldn’t tear myself away. Several times I found I wasn’t actually breathing! Sweet William is a book that clamours to be read at breakneck speed.

The first person viewpoint is very disturbing. It’s not always clear to whom the narrator is speaking – the reader, a voice in his head, or perhaps someone beyond the end of the novel in the same way he has had therapy in the past. What I found both compelling and appalling was that the way in which he justified his actions, which are clearly insane, was only a short step away from the way in which we ‘normal’ people justify our own actions too. I don’t know whether the concept of the way we treat those with psychiatric health issues and the exploration of how they think and behave was a deliberate treatise by Iain Maitland or simply a device upon which to construct the plot but either way I found Sweet William stunning and thought provoking. Similarly, not knowing the name of the narrator until well into the second half of the novel adds to that feeling of society rejecting and erasing those with his kind of problems.

I can’t say too much about the plot or the settings as they are so closely linked and I don’t want to spoil the read but I will say that when Stamford, a location just a few miles from where I live, was mentioned I actually felt quite nervous and threatened.

I felt the concept of ‘what if’ was brilliantly handled, making my brain reel with possibilities. What if it were my child? What if I felt responsible? What if my mental health broke down?  There are also several unanswered questions in Sweet William that make the book so very disturbing so that it keeps nagging away in my mind. Sweet William is a book I won’t forget in a hurry. In my view it is outstanding.

Iain Maitland is the author of Dear Michael, Love Dad (Hodder, 2016), a moving book of letters written to his son, who suffered from depression and anorexia. Iain is an ambassador for Stem4, the teenage mental health charity, and gives regular talks about mental health issues in the workplace. A writer since 1987, he is a journalist and has written more than 50 books, mainly on business, which have been published around the world. 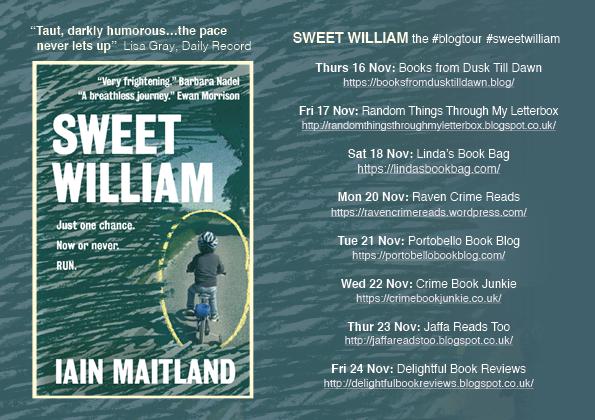