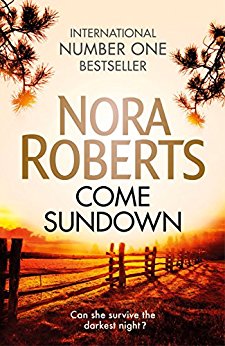 It gives me very great pleasure to be part of the launch celebrations for international bestselling author, Nora Roberts’, latest novel Come Sundown.

Come Sundown was published on 30th May by Piatkus, an imprint of Little Brown and is available for purchase in e-book and hardback here. 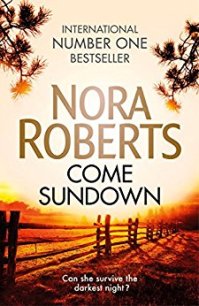 Bodine Longbow loves to rise with the dawn. As the manager of her family’s resort in Western Montana, there just aren’t enough hours in the day – for life, for work, for loved ones. She certainly doesn’t have time for love, not even in the gorgeous shape of her childhood crush Callen Skinner, all grown up and returned to the ranch. Then again, maybe Callen can change her mind, given time…

But when a young woman’s body is discovered on resort land, everything changes. Callen falls under the suspicion of a deputy sheriff with a grudge. And for Bodine’s family, the murder is a shocking reminder of an old loss. Twenty-five years ago, Bodine’s Aunt Alice vanished, never to be heard of again. Could this new tragedy be connected to Alice’s mysterious disappearance?

As events take a dramatic and deadly turn, Bodine and Callen must race to uncover the truth – before the sun sets on their future together.

My Review of Come Sundown

When Alice is abducted on her way home there are reverberations for years to come in the Bodine household.

If you’re not a Nora Roberts fan there’s every danger that Come Sundown will appear formulaic and predictable. If, like me, Nora Roberts is your guilty pleasure then Come Sundown contains every element you could possibly hope to see and more.

Firstly there are tall attractive men in jeans, especially Callen. Mixed with the strong feisty women like Bodine, there’s a sexual chemistry with love and romance guaranteed.

There’s great drama in the plot of Come Sundown, with vulnerable women abducted, abused and killed so that no-one is really safe and every one is a suspect, making for an entertaining and exciting read as you try to work out who’s next and who dunnit! Nora Roberts has that Christie-esque technique of making the perpetrator someone seemingly innocuous who was hidden in plain sight all along and I love that element to her stories.

Come Sundown contains all those themes I expect too. Nora Roberts covers friendship and rivalry, love and passion, feminism and relationships, childhood and adulthood, family and home with genuine warmth. However, in Come Sundown, there are more controversial issues raised so that added depth occurs too. ‘Sir’ is a white supremacist uncovering uncomfortable attitudes of sexism, racism and religious fanaticism that, as an outsider to America, have a horrible fascination. I believed in his character totally so that the passages where he appeared genuinely made my flesh crawl.

I really, really, enjoyed reading Come Sundown. I loved the pun in the title as events unfold when Callen returns to the Bodine establishment on his horse, Sundown (who is also a character in his own right), but the denouement of the story is when sundown arrives too. I enjoyed every aspect of Come Sundown as sheer, reliable, Nora Roberts escapism. A highly entertaining read.