I’m thrilled to welcome Sacha Black, author of 13 Steps to Evil: How To Craft Superbad Villains to Linda’s Book Bag today. Sacha was one of the first people I followed on social media when I began blogging and is the driving force behind the Annual Bloggers Bash awards. I’m sure Sacha won’t mind me hijacking her post to hint that votes for the Best Book Review Blog can be made here!

As Sacha’s book 13 Steps to Evil: How To Craft Superbad Villains is published today, 30th May 2017, I asked her to choose three villains she feels are the best she’s encountered for her guest post.

13 Steps to Evil: How To Craft Superbad Villains is available for purchase through the links here.

13 Steps to Evil: How To Craft Superbad Villains

Your hero is not the most important character in your book. Your villain is.

Are you fed up of drowning in two-dimensional villains? Frustrated with creating clichés? And failing to get your reader to root for your villain?

In 13 Steps to Evil, you’ll discover:

Finally, there is a comprehensive writing guide to help you create superbad villains. Whether you’re just starting out or are a seasoned writer, this book will help power up your bad guy and give them that extra edge.

These lessons will help you master and control your villainous minions, navigate and gain the perfect balance of good and evil, as well as strengthening your villain to give your story the tension and punch it needs.

If you like dark humour, learning through examples and want to create the best villains you can, then you’ll love Sacha Black’s guide to crafting superbad villains. Read 13 Steps to Evil today and start creating kick-ass villains.

Asking me who the best villains are after having researched them for six months is just mean! But I’ll do my best to answer the question anyway. :p

I’ve chosen an unusual mix of bad guys because I think we can learn just as much from lesser known villains as we can from the super famous ones.

This might be cheating a little because technically Deadpool is an anti-hero, not a villain, but I’m counting him because he’s outrageous and I think comic book heroes and villains can often provide awesome inspiration and lessons as well as literature can.

Deadpool is a normal healthy man until he is diagnosed with terminal cancer. He abandons his fiancé and goes to have an experimental treatment that manipulates his DNA. He gets super regenerative powers – i.e. he can’t die. But during the process, his skin is completely mangled.

What can we learn from Deadpool?

Reading about heroes can get boring – they are all the same, damsel-carrying, world-saving hunks of muscle. As writers, we need to consider what our readers want and sometimes implanting a standard villain won’t do the trick. That’s why anti-heroes are so much fun. They’re the best of both worlds and Deadpool is a really great example of one.

Why does Deadpool work?

Deadpool has an acerbic wit, his attitude stinks, and his actions are even worse. But his morals are in the right place. Everything he does is to save his fiancé. You’d think his actions might put people off him as a protagonist. But it works because he is a reflection of humanity. Superheroes (the damsel carrying ones) are a Utopian ideal, they don’t exist, and that’s why they get boring – because we can’t relate to their perfection. Whereas, Deadpool, with his shoot first- ask later ethos is a much closer reflection of how we might act if someone we loved was in danger.

The anti-hero and Deadpool, in particular, is a real, relatable, flawed character. He makes bad decisions, and that makes him ‘human’ which is why he works so well.

*spoiler alert* If you haven’t watched Once Upon A Time the TV series, and want to then skip over this section.

Who is The Evil Queen?

The Evil Queen (from the Snow White fairy tale) has been re-written in so many incarnations I couldn’t possibly name them all. But one of the best current versions is from the TV series Once Upon A Time. The series is based in Storybrook, a fictional town in America that’s closed off by magic. Storybrook is inhabited by every fairy tale character imaginable. The Evil Queen trapped them there in Storybrook as revenge for something Snow White did to her in the fairy tale realm.

What can we learn from The Evil Queen?

Unlike most villains, The Evil Queen has a really neat character arc. At the start of the series, she is the main villain, enacting revenge on Snow for what she did. But as the series progresses she changes. Her old emotional wounds that made her a villain are healed, and unlike most villains, she changes and becomes a hero. Without being too much of a villain nerd, I think this is awesome. It’s rare to see a twist like this, and it makes the show unique and really engaging for me as a viewer. That’s something we need to learn from as writers.

Why does The Evil Queen work?

The reason she works as a character is that although she changes fundamentally, the screenwriters make her suffer for it. It’s hard to change as a person; we know that ourselves. They’ve kept the story grounded in reality, and made it hard for The Evil Queen to maintain her hero status. She has to fight daily inner demons to stay good and make good choices because her natural instinct is to do bad things. This makes her such a gritty character I LOVE IT.

Who is Hannibal Lecter?

Hannibal Lecter is a character based on the books by Thomas Harris. He is arguably one of the best villains of all time. Interestingly, despite being a villain, he is also the protagonist of stories. Hannibal is a cannibal and a serial killer.

What can we learn from Hannibal Lecter?

The reason I chose Hannibal is that he is what I would call a typical villain. When you think of a bad guy, usually you’ll think of a psychopathic murderer. That’s exactly what Hannibal is, and it makes him a classic villain. Does bad stuff because he wants to, and doesn’t always have a justification for doing it; he’s psychotic.

But his depiction, his consistency in his behaviour throughout the stories is what makes him so good. There is no character arc for him; there is only the constant cannibalising murder and the knowledge that no matter what hero comes along and tries to change him she never will. And that is a little terrifying.

Why does Hannibal Lecter work?

But that’s why Hannibal works, and that’s the lesson we should learn.  Just as The Evil Queen did grow and develop and that change is what made her work, Hannibal does not, and that’s what makes him work.

Throughout the story, although in Silence of the Lambs he helps Clarice with her investigation (a good action), he does not change. His values and principles remain the same right to the end. For me, the icing on my Hannibal cake is that he knows what he is doing is completely wrong, and yet, he takes pleasure in doing it anyway and even more terrifying is his articulation of what he does is absolutely crystal clear. What’s scarier than having someone tell you exactly how they intend to carve you up and knowing nothing you do can change their mind? Genius characterisation.

(Thanks Sacha – and I think I’m probably traumatised now!) 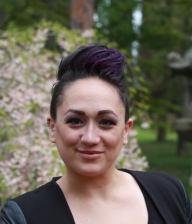 Sacha Black has five obsessions; words, expensive shoes, conspiracy theories, self-improvement, and breaking the rules. She also has the mind of a perpetual sixteen-year-old, only with slightly less drama and slightly more bills.

Sacha writes books about people with magical powers and other books about the art of writing. She lives in Hertfordshire, England, with her wife and genius, giant of a son.

When she’s not writing, she can be found laughing inappropriately loud, blogging, sniffing musty old books, fangirling film and TV soundtracks, or thinking up new ways to break the rules.

63 thoughts on “Villains: A Guest Post by Sacha Black, Author of 13 Steps to Evil”