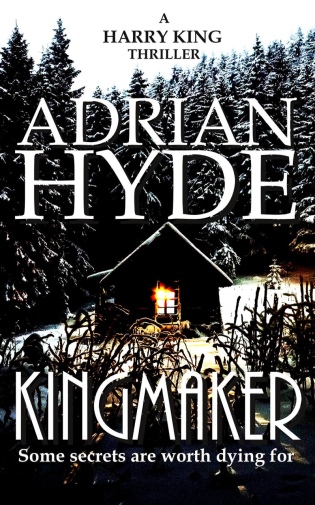 It gives me great pleasure to welcome Adrian Hyde to Linda’s Book Bag today. Adrian’s novel Kingmaker was published by Three Assassins Press on 27th September 2016 and is available for purchase in e-book and paperback here. Kingmaker is set in Norway, a country I’m desperate to visit, so I asked Adrian to tell me more about why he chose this particular setting for his writing. 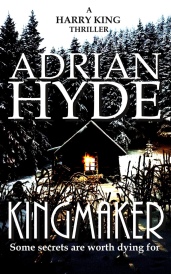 When the world is against you, who do you trust?

April 1940. Norway has fallen under the Nazi Blitzkrieg. Only a small British force now stands between Hitler’s SS and the ultimate prize…

Lieutenant Harry King is in trouble again. Haunted by his past and consumed by alcohol, he is saved from his fate by a mysterious senior officer. When he is sent on a seemingly simple errand, he stumbles into a conspiracy that could change the course of the war.

Dragged into a hair-raising world of murder, mystery and betrayal, King must choose between his duty, love and revenge. In a heart-pounding race across the frozen tundra, mountains and fjords, can he survive against the odds and uncover the traitor at the heart of his world?

When I started to write my book, Kingmaker: A Harry King Thriller, I wanted to write a mainstream thriller (as that is what I mostly love reading at the moment), but as a new author I knew that I needed something different so I decided to set it in Norway at the start of World War 2. I was unsure about this at first as I know that the typical “military” books reader is very different from the more mainstream thriller reader, so I had to make sure that the background supported the main plot, rather than the other way around. It must have worked because lots of readers have already said how much they enjoyed reading Kingmaker and were surprised at how unlike a traditional “war story” it is. I think the landscape really helped me to achieve my target.

So why did I choose Nazi-controlled Norway in 1940? Well, firstly, I have always been fascinated by the war – as were most boys of my age, growing up in the nineteen-eighties surrounded by war movies on the television at Christmas, and this was increased by tales of my father’s own military experience in the fifties. As a result of this, history has always been a passion of mine, so over the years I started to read more about both World Wars in order to better understand what happened. I was particularly drawn to those events that didn’t go as planned and were consequently swept under the carpet by history and establishment alike. The British failure to stop Hitler’s invasion of Norway was largely ignored and overlooked by Britain at the time, desperate to focus instead on the miracle of Dunkirk and the success of the Battle of Britain. Despite this, I felt it was a fascinating story of bravery and plucky resistance against overwhelming odds, and I decided to use this reflection of my similarly confused, misunderstood and underestimated protagonist. Harry King is a British Lieutenant with a haunted past and a drinking problem despite his responsibility. He is falling to pieces but nobody wants to listen, mainly because the world was far less understanding of mental health issues at that time and King’s torment is lost in a sea of old-school authority and the British stiff upper lip. As part of the joy of discovering and developing King, I wanted to see how he coped under pressure by placing him out of his depth in a foreign country, and then throwing him in at the deep-end by dragging him into a world of conspiracy, murder and treason. Despite his many problems and imperfections, King is surprisingly resilient and heroic, and wins through in the end by forgiving himself and gaining redemption. The frozen landscape helped cleanse him of his past and give him a clearer vista of his future.

Secondly, the stark, barren winter landscape of Norway in the early spring has a mythical, surreal quality to it that offers a stark contrast to the usual depictions of the chaos of war. It felt refreshing to use the snow-covered valleys, mountains and fjords as a character of their own, no less deadly than the man-made weapons carried by King’s enemies. He feels isolated at first, a theme echoed in the silent landscape, and his own pain begins to thaw as the snows also finally start to recede and he uncovers his past. There was also a timeless purity of the still wintry landscape that even the horrors of war couldn’t sully, and I found that King had much in common with this as he initially seems as hard as the mountains themselves, but then he shows a hidden warmth and humanity that is only unlocked as his feisty local companion Anja helps him to face his demons and find love again. I felt that it was important to include a strong female character, as too many books set in this period tend to forget that the vital role that women played in winning the war.

And finally, I also loved the landscape because it conjures-up another, almost magical dimension with its mythology of ancient kings, lost treasure and dark secrets that nicely overlapped the background narrative of the later war. The more that I read about the Norwegian side of the story, the more I just fell in love with the country and I knew that had to try to write something worthy of those unlucky few who were there at the time and faced death in Norway’s magical scenery. I hope that people will enjoy reading Kingmaker as much as I enjoyed writing it. 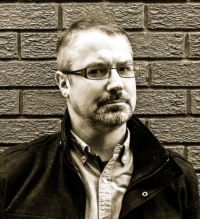 Adrian Hyde is a thriller writer, history nut and citizen of the world. He was born in the city of Derby, England in 1975, the son of an ex-soldier. He grew up on the doorstep of the beautiful Derbyshire Peak District, and his father’s military service and an interest in local history inspired him to write from an early age.

Educated in Derby and Heanor, he studied Politics at the University of Reading, Berkshire. Adrian then had a successful career in sales, marketing and product management, mainly in heavy engineering and construction equipment companies, where he travelled extensively throughout the world.

All this was to change when his wife was diagnosed with dementia, and Adrian became a full-time single parent and carer, however the experience spurred him on to return to writing full-time. He still loves Derbyshire but now lives in Burbage in neighbouring Leicestershire with his two children and Ben the Labrador. His first novel – Kingmaker: A Harry King Thriller – was published by Three Assassins Press in September 2016. He is currently working on the sequel.

6 thoughts on “Norway, An Authentic Setting, a Guest Post by Adrian Hyde, author of Kingmaker”