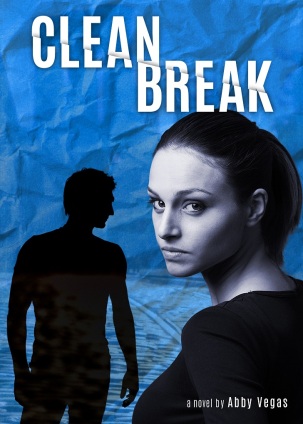 I love supporting debut novelists (perhaps in the hope someone might support me if I ever finish my novel!) and it is with great pleasure that I welcome Abby Vegas, author of Clean Break, to Linda’s Book Bag today.

Clean Break is available for purchase in e-book and paperback from your local Amazon site. However, Clean Break will be free on September 28th, 29th and 30th!

Lane Haviland can’t seem to catch a break. She’s dead broke, barely functioning as an adult, and completely alone in New York City. Her so-called “apartment” is a six-by-nine cell in a Brooklyn basement. And her new boss hasn’t ever met a personal or professional boundary she can’t bulldoze through.

Still, Lane’s determined to at least attempt to claw her way back to respectability. But she can’t seem to get her mysterious handyman, Viktor, out of her apartment – or her headspace. Maybe that’s a good thing: Viktor’s easy on the eyes, and that deep-voiced Russian accent is beyond sexy. But as he and Lane grow closer, he can no longer hide his connections with a dangerous criminal underworld – where secrets can be deadly.

An Interview with Abby Vegas

Hi Abby. Thank you so much for agreeing to answer some questions on my blog about your writing and your debut novel Clean Break.

Thanks for having me!

Firstly, please could you tell me a little about yourself?

I’m a married mom of two school-age girls. We all just moved from Connecticut to Michigan. I am writing this from inside a pile of moving boxes and bubble-wrap.

My first novel came in fits and starts – I think I was falling into the beginner’s trap of waiting for inspiration to strike. I’d write a few scenes and then I’d look them over critically and think “Nah, that’s nowhere near good enough” – and then I’d put everything aside and go do something else. (This is a terrible way to write a book and I don’t recommend it.) My moment of truth came in the form of a New Year’s resolution: I’d finish a first draft of the novel by the following New Year’s Eve. I beat that deadline by two weeks.

(Oh dear. I think you’ve just described my own approach to writing.)

I love writing dialogue – it comes more easily to me than exposition. It’s kind of like having a conversation with imaginary characters inside my head, which sounds strange but it’s true.

Most difficult for me is getting started. Not just starting on a new project, but getting started each time I sit down to write. There’s this vague anxiety (standard for most writers, I think) that the well is empty and nothing will come out.

You have been described as a female Chandler who can write a brilliant one-liner. How far does this come easily to you and how much do you need to work at this element of your writing?

I tend to crack wise in real life, so it’s fun to infuse fictional characters with some of that sass. Humour is tricky, though. You have to cut out everything that doesn’t work and be ruthless about it.

The cover of Clean Break gives prominence to the female figure. How did that image come about and what were you hoping to convey (without spoiling the plot please!)?

I just about gave myself an ulcer deciding on a cover. I wanted Lane (the heroine) to be front-and-centre because Clean Break is really her story. There’s definitely romance and humour and suspense in there as well, but at its heart I believe the book is Lane’s journey from one very specific point in her life to another. Lane’s romantic interest, Viktor, also earns a place on the cover – and he’s a shadowy figure there.

Clean Break is set in New York. How important was this location to you and why not another city?

I grew up in New York City. Living there is strange – you’re literally stacked on top of each other in high-rise buildings, crammed into subway cars like sardines. It’s paradoxical, but even in all that wall-to-wall humanity it’s pretty easy to feel isolated. I loved the idea of two lonely people finding each other against such a glittering, crowded backdrop.

Clean Break appears to bridge women’s fiction and crime or mystery fiction. How far was this your intention and how far did it arise naturally from your writing?

My favourite authors tend to touch multiple genres in their books – Deborah Harkness, Diana Gabaldon, and Helen Fielding. So yes, I was absolutely aiming for that sweet spot where women’s fiction meets romantic suspense!

Although there is romance, there’s no explicit sex in Clean Break. Why did you choose this approach?

I’m no good at writing smut, although I do enjoy reading it. Several Clean Break readers have commented that they found it refreshing how the chemistry builds up slowly between Lane and Viktor – it’s a mutual attraction that builds and simmers in a realistic way. Slow burns are very sexy.

I know you’ve always liked fiction with strong female protagonists. If you could have a conversation with a woman from someone else’s book, who would you choose and why?

If Clean Break became a film, who would you like to play Lane and Viktor?

I think Emily Blunt would make a great Lane. She’s wonderful in everything she does, and she has a quiet toughness about her. For Viktor I was picturing Richard Armitage in my head while I was writing. He has a very expressive (and gorgeous) face.

If you had 15 words to persuade a reader that Clean Break should be their next read, what would you say?

Thank you so much for your time, Abby, in answering my questions and good luck with Clean Break.

Abby Vegas has always been a writer and story-teller. She is a fan of Richard Armitage and draws and writes for the webcomic Awkward Celebrity Encounters.

5 thoughts on “An Interview with Abby Vegas, author of Clean Break”