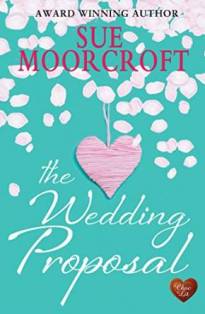 Today I’m delighted to be featuring an interview with another author I’ve met in person, the lovely Sue Moorcroft. Sue is a prolific and award winning writer and an absolute delight to spend time with.

An Interview with Sue Moorcroft

Hi Sue. Thank you so much for agreeing to answer some questions on my blog about your writing.

I write commercial women’s fiction on sometimes unexpected themes – and also short stories, serials, novellas, columns and courses (I like to keep busy and I’m a creative writing tutor, too). Apart from writing, my chief pleasures are reading, watching Formula 1, Zumba, yoga, FitStep, and hanging out with friends. I was born in Germany into an army family and lived in Cyprus and Malta when growing up.

Because of a bit of a false start I was a while coming to reading and writing but once I realised I could a) lose myself in reading b) get good marks for making stuff up, I embraced the world of fiction. However, people didn’t seem to see ‘novelist’ as a credible goal and I was too easily dissuaded from journalism so, although I never stopped writing, I only tried to make it into a career when I became a mum and could write while the children were at school. I wrote two novels, which I’m happy to say ended up in the bin, then I took a course with a view to writing short stories for magazines, which proved a successful stepping stone to writing novels.

If you hadn’t become an author, what would you have done instead as a creative outlet? Would you have become a Formula One driver?

I wish! That’s a career that takes a lot of commitment, talent, strength, luck and funding. I used to fancy that I could make a living as a commercial artist but I don’t think I was good enough.

You’re assiduous in researching your novels. Which was the most challenging to research and why?

The condition of narcolepsy, for Dream a Little Dream. It’s a complex, fascinating neurological condition, much misunderstood and even mocked. It infiltrates every aspect of the lives of those affected. I gave narcolepsy to Dominic Christy almost on a whim and there were times when I heartily wished I’d given him something else. All the information I found seemed superficial. It wasn’t until I went onto the message board of Narcolepsy UK that I connected with a man, also called Dominic, who made the book possible by giving untold hours to educating me on the condition and reading the manuscript twice, for which I’m profoundly grateful.

The editing is easiest (and most enjoyable), especially when I’ve had a bit of a break from a book and gained objectivity. I also like the first ten thousand words because I feel it’s like a Formula 1 race – I’m on the starting grid but haven’t crashed into anything yet. The first draft, generally, is difficult, as I have to keep giving my best for lap after lap and even a small mistake can have a large consequence.

I know you do a lot of planning before you write. What format does this take? Do you use Pinterest, Post-it notes, spreadsheets or some other means to plot your novels?

A bit of everything. I tend to begin with character and I handwrite bios, look at major characters from the viewpoint of several of the other characters, establish conflicts and goals, secret desires, unconscious desires, and backstories. If I can link the conflicts/goals of the major characters then I feel this helps the narrative drive. For example, in The Christmas Promise, one of Ava’s conflicts is that her couture millinery business is struggling. One of Sam’s conflicts is that his mum, Wendy, is in the elapse between surgery and chemotherapy. Intent on giving Wendy the best Christmas he can, he hits on the idea of giving her a frivolous and expensive present and commissions Ava to make her a hat. This single incident leads to other ways of Ava keeping her business afloat until she has the potential to make it big. Although I then make her realise that success comes at a price, there are many other ways I keep Sam and Ava together, including another of Ava’s conflicts, being threatened with revenge porn by her ex-boyfriend. As I link the ideas, I staple bits of paper together in a logical (but not pretty) way. As I work through dynamics between various characters I have a lot of paper by the time I begin writing. (I call this ‘the compost heap method’.) 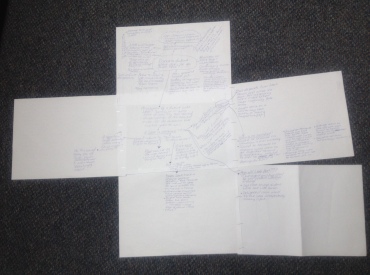 I create a timeline as I write (more stapled pieces of paper), a spreadsheet of character names/dates of birth and marriage etc, and when I get stuck in my plotting I either create a mind map or I use sticky notes on a wall. I also make notes on my phone and send them to myself so I can add them to a document of thoughts and ideas that’s in the same computer folder as my manuscript. As a book progresses, I regularly reassess my compost heap to see what I still need.

I don’t know why I plan by hand and write on a computer but it works for me.

I like to work in my small and overcrowded study with my back to the door and window. I start about 07.30 and finish about 18.00 but I usually have a couple of hours off for an activity – Monday is piano lesson, Tuesday Zumba, Wednesday Yoga, Thursday FitStep, Friday Zumba again. However, when I go away from home for meetings, conferences and courses, I work wherever I can: trains, aeroplanes, hotels or coffee shops. Then I use my iPad and keyboard.

I read a lot in the area I write – authors such as Katie Fforde, Jill Mansell, Sarah Morgan – and enjoy many US authors, too, especially those who write romantic suspense (Linda Howard, Suzanne Brockmann, Brenda Novak) or small-town series (Jill Shalvis). I throw in the occasional biography or chiller but, on the whole, I like my reading diet to be ‘feel good’. There’s enough bad stuff in real life.

I think it’s more the other way around: once I have an idea, I interest myself in the subject. Or I happen across something I think I can use, as when I met milliner Abigail Crampton. We were both guests on BBC Radio Cambridgeshire and I thought millinery would be a cool occupation for a heroine so shamelessly hit up Abigail for help. Now I notice hats everywhere and when someone shows me a hat shop I tell them how mass-produced hats differ from handmade hats (whether they want to know or not).

I know that Ratty from ‘Starting Over’ is one of your favourite characters from your writing. Why is this? 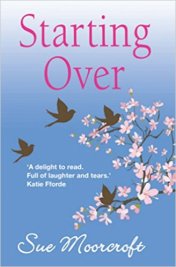 I never quite fell out of love with Ratty. He’s been my most successful hero, judging from reader feedback (and even fanmail) and I’ve just snuck him into The Christmas Promise, as it turns out he’s a childhood friend of Sam’s. I would say he’s my most quirky hero and the least PC. Make of that what you will! I conceived him after watching Kevin Kline as the pirate king in Pirates of Penzance (though I shaved the moustache and changed the colour of his eyes). Like the pirate king, Ratty’s the leader of a motley crew, has a slightly flexible personal code but would risk everything if a friend needed him.

You have a reader street team. How important do you think social media is to authors in today’s society?

It depends upon the author. It’s important to me and I enjoy chatting on Facebook or Twitter, which are my major channels. It’s such a privilege when I receive nice messages from readers! Social media’s perfect for discovering what current schools rules are about teenagers dying their hair blue or how people feel about Christmas. I love the feeling of being connected and I’ve gained work via social media contacts. I’ve written at length about my views on social media on my own blog which can be found here.

Team Sue Moorcroft is a joy to me. I’m honoured and humbled that people like my work enough to advocate it whenever they get the chance and to want to chat to me on the Facebook group. People can join via my website.

If you had 15 words to persuade a reader that a Sue Moorcroft book should be their next read, what would you say?

Lose yourself in witty stories of characters you care about and their contemporary, intriguing issues.

Tell us more about the book that’s scheduled for release later this year, ‘The Christmas Promise’.

Set mainly in London (although with an excursion to Middledip village for those readers who have asked for more Middledip novels!), The Christmas Promise sees Ava struggling for money, disliking Christmas, and being threatened by her ex-boyfriend, Harvey. Her best friends, Izz and Tod, are both working for Sam Jermyn at his communications agency and Ava finds herself ready to dismiss him as a ‘golden boy’. She realises there’s more to him when she gets a glimpse into his feelings about his mum’s illness and how he’s trying to give his mum the best Christmas he possibly can. It’s a book that contrasts pretty hats, animated Christmas cards, parties and a WAG called Booby Ruby with revenge, cancer and betrayal.

It sounds great! The Christmas Promise is available for pre-order here.

Thank you so much, Sue, for your time in answering my questions.

Thank you for having me on your blog!

Award winning author Sue Moorcroft writes contemporary women’s fiction with occasionally unexpected themes. The Wedding Proposal, Dream a Little Dream and Is This Love? were all nominated for Readers’ Best Romantic Read Awards. Love & Freedom won the Best Romantic Read Award 2011 and Dream a Little Dream was nominated for a RoNA in 2013. Sue’s a Katie Fforde Bursary Award winner, a past vice chair of the RNA and editor of its two anthologies.

Sue also writes short stories, serials, articles, writing ‘how to’ and is a creative writing tutor.

Sue’s next book is The Christmas Promise.

26 thoughts on “An Interview with Sue Moorcroft”