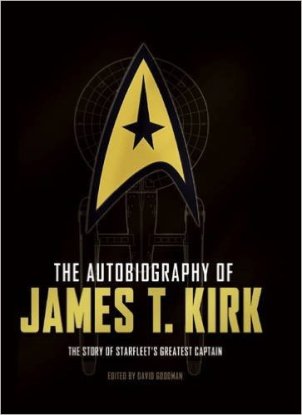 I have had The Autobiography of James T Kirk: The Story of Starfleet’s Greatest Captain ‘edited’ by David A Goodman on my reading pile since it was published in hardback and e-book by Titan Books on 11th September 2015. As it will be released in paperback on May 1st 2016, I thought it was about time I read it!

The Autobiography of James T Kirk: The Story of Starfleet’s Greatest Captain is available from Titan, Amazon, Waterstones and all good book shops.

The Autobiography of James T Kirk

The Story of Starfleet’s Greatest Captain

The Autobiography of James T. Kirk chronicles the greatest Starfleet captain’s life (2233–2293), in his own words. From his youth spent on Tarsus IV, his time in the Starfleet Academy, his meteoric raise through the ranks of Starfleet, and his illustrious career at the helm of the Enterprise, this in-world memoir uncovers Captain Kirk in a way Star Trek fans have never seen. Kirk’s singular voice rings throughout the text, giving insight into his convictions, his bravery, and his commitment to the life—in all forms—throughout this Galaxy and beyond. Excerpts from his personal correspondence, captain’s logs, and more give Kirk’s personal narrative further depth. 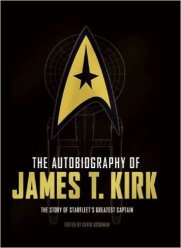 The Autobiography of James T Kirk: The Story of Starfleet’s Greatest Captain is definitely not a book I would have chosen had it not been sent to me for review, but I thoroughly enjoyed it. Fans of the Start Trek franchise will love it.

Written in the first person with a foreword by Leonard H. McCoy and an afterword by Spock of Vulcan there is an authenticity to the book that made me forget I wasn’t reading about a real person. Indeed, I felt quite tearful and moved reading the last few words from Spock! The editor’s footnotes throughout add to this authentic impression.

There is, as we might expect, considerable humour in the book such as when Kirk and the crew are in a cinema on Planet IV of System 892, watching actors playing the crew of the Enterprise in a film, when Spock first comes aboard or when Kirk impersonates a Starfleet officer, but it was the personal and honest elements that appealed to me most, exemplified when Kirk questions his own abilities and acknowledges that some of his actions have led to others’ deaths. The colour photos in the middle of the book give further depth, especially the letter to Kirk’s son that he never sent. It was comments from Kirk himself that made the narrative so interesting. He says at one point that he feels the burden of his captaincy giving him a loneliness because he is in command and therefore cannot be a friend to any of the crew. I’m sure many of those in charge across the world feel this too and there are some deep issues explored within these pages.

Not being a Trekky, I have no idea if the stories and anecdotes are reflections or extensions the films and television series, but I don’t think it matters. This ‘autobiography’ can be enjoyed as a highly entertaining stand alone read.

What must also be acknowledged is the quality of David A. Goodman’s writing. He knows how to convey direct speech brilliantly giving a vivacity to conversations, although I did find myself hearing the voices of the actors from the television programmes I vaguely remember watching as a child. The range of sentence lengths give variety to the style so that The Autobiography of James T Kirk: The Story of Starfleet’s Greatest Captain is entertaining even to readers like me who have no particular interest in Star Trek or in sci-fi fiction. Great fun!

11 thoughts on “The Autobiography of James T Kirk edited by David A. Goodman”